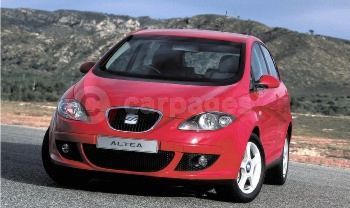 Visitors to The Sunday Times Motor Show Live at the NEC in Birmingham will have their first chance to see two exciting new SEAT models as well as popular models from the existing range. Taking centre stage will be the all-new Altea, SEAT’s innovative Multi Sports Vehicle (MSV), and for Cupra aficionados, the eagerly awaited SEAT Sport-built Ibiza Cupra.

The new Altea marks the start of a whole new generation of SEAT cars with the emphasis on stylish design and sporty performance. The MSV concept brings together the best of the practical aspects associated with MPVs and the more emotional characteristics associated with SEAT cars. Space and flexibility combined with sporty performance and stunning good looks make the Altea so much more than a family car.

The 5-door, 5-seat Altea range has a choice of three specifications and four engines (two petrol, two diesel) all with over 100 PS power output. Standard features across the entire range include air conditioning, six airbags, electric windows, radio/CD player, alarm, over 30 different storage spaces and cubby holes and, unique to Altea, windscreen wipers cunningly hidden in the A pillar. The Altea also embraces plenty of new technology with two-zone climate control, a 2.0 litre FSi engine and a DSG gearbox appearing in the SEAT range for the first time.

SEAT’s Cupra and Cupra R models have gained a big following in Britain, and fans will be pleased to see the first of SEAT Sport-built Ibiza Cupras on the stand. The Ibiza Cupra will have the aggressive body styling, 17" alloys and low profile tyres with visible brakes and lowered suspension that are SEAT Sport’s trademark. There will be a choice of engine too. Initially it will be available with a powerful 1.9 litre TDi engine tuned by SEAT Sport to deliver 160 PS. Later in the year it will be produced with the familiar and popular 1.8 20V T 180 PS petrol engine.

Other popular SEAT models that will be taking their place at the show are the recently introduced Ibiza FR with 1.9 TDi 130 PS engine in OVNI yellow; a similarly powered Cordoba SE; three times winner of the Fleet News Best MPV, the Alhambra; a Toledo Sport TDi; and the most powerful car in the SEAT range and the jewel in SEAT Sport’s crown, the Leon Cupra R 225 PS.

The SEAT stand can be found in Hall 5 at the NEC.