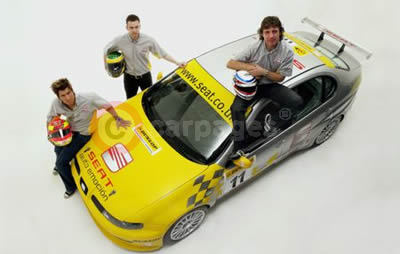 SEAT Sport UK is mounting a challenge for the BTCC Manufacturers’ title in its second season of competition, as it prepares for the start of the 2005 Dunlop MSA British Touring Car Championship.

Jason is the most experienced driver with 156 BTCC race starts, 21 wins and the 2001 Championship title behind him. Last year the 37-year old Monaco-based driver won seven races (two more than any other driver) and finished 3rd in the Drivers’ Championship. He said: "Last year was one of the most successful I’ve had in every aspect, so the aim for 2005 is to continue from where we left off six months ago. I can’t wait."

James Pickford’s BTCC debut comes as a result of winning the 2004 SEAT Cupra Championship by scoring three race wins, nine podiums and six fastest laps. This achievement earned the 25-year old Macclesfield driver a place in the SEAT Sport UK team and the Autosport British Club Racing Driver of the Year award. Pickford said: "Everything will be new to me this year, so I’m not going to put myself under pressure in the first race meeting by worrying too much about results. Having said that, I feel confident and I’m looking forward to a very good season ahead."

Luke Hines made his BTCC debut in 2003, winning the Production Class Championship with six wins, eight poles and nine fastest laps in a Barwell Motorsport Honda Civic R. The 22-year old driver from Essex who drove for VX Racing last year, won two races and regularly finished in the points. Luke feels right at home at SEAT and has quickly built a relationship with his new team-mates. He said: "In the test we did at Silverstone, the lap times Jason, James and myself set were very close. That was really encouraging and I think come race weekend as a team we’ll be able to push ourselves along really well."

Scott Dennis, SEAT UK National Motorsport Manager, said: "Our aim is to challenge for the British Touring Car Championship Manufacturers’ title and to give ourselves the best chance of doing so we have created a very strong SEAT Sport UK team. We have a good opportunity to start the season strongly and the depth of talent within the team will keep that momentum going throughout the season."

SEAT Toledo Images may not be UK specification cars. Colours and exterior and/or interior elements may differ from actual models.