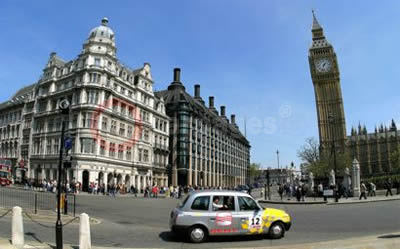 SEAT Sport has taken to the streets of London with a fleet of 30 "black" cabs, all dressed in eye-catching SEAT British Touring Car livery. The sporty cabs are proving a great hit with passers by and passengers in the capital, and are generating enormous interest in SEAT’s motor sport activities. When all 30 cabs lined up outside Leicester Square to help promote the recent round of the World Touring Car Championship at Silverstone (Sunday 15 May), the spectacle drew large crowds of fans, autograph hunters, well-wishers and the just plain curious. And their good wishes certainly paid off as the SEAT Sport team took its first win of the season in the second race with Rickard Rydell at the wheel and guest driver, SEAT UK’s Jason Plato, coming second.

But, it’s not just Londoners and tourists who are appreciating the unusual taxis. In April, the SEAT Sport cabs were judged by Taxi Media to be "Campaign of the Month", and especially praised for being striking and unusual. Not only is it one of the largest campaigns by a car manufacturer on taxis, but Taxi Media also judged it one of the best in this category to date.

The SEAT Sport cabs will be seen on the streets of London right through the BTCC and SEAT Cupra Championship season until the end of September.