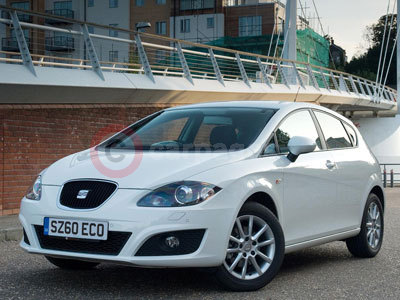 The Cava corks are popping as Barcelona-based Spanish car maker SEAT celebrates a raft of sales records both here in the UK and in its home market.

With the numbers now well and truly crunched SEAT can look back on a record UK market share for the last 12 months of 1.62% (source: SMMT), which comfortably exceeds its previous best share of 1.50% - registered in 2009.

What's more December 2010's market share of 1.65% matches the all-time record for the month, precisely equalling the previous best of 1.65% from 2003. And this sales success is all the more encouraging when set against the UK's ongoing uncertain economic background.

The Spaniards' sporty, stylish and engaging model line-up - which ranges from perennial favourite the SEAT Ibiza supermini through sporty SEAT Leon hatch and practical SEAT Altea and SEAT Altea XL to capacious new seven-seat SEAT Alhambra and luxurious SEAT Exeo saloon and ST - is, this year, set to be enhanced by further important revisions such as the debut of a new multitronic gearbox in CO2-efficient diesel-engined versions of the SEAT Exeo and SEAT Exeo ST.

SEAT's dynamic ethos, which underpins every vehicle in its line-up from the frugal SEAT Ibiza E Ecomotive to the potent SEAT Leon Cupra R and commodious new SEAT Alhambra, continues to strike a chord with a growing number of UK drivers.

Strong performances across the entire range helped SEAT UK to its 2010 total of 32,935 new car sales, an impressive increase of almost ten per cent on the 2009 figure and one that comfortably outperforms the market as a whole which was up by just 1.8% in the same period.

The elegant SEAT Exeo family of saloon and estate models is making an increasingly important contribution to SEAT's sales, their combined total of more than 2,400 registrations in 2010 now making them the brand's third biggest seller here, overtaking SEAT Altea and SEAT Altea XL in the process.

Meanwhile SEAT's growing appeal is reaping big rewards in its home market, too. The brand has grabbed leadership in its domestic market for the first time in more than 30 years, taking more than nine per cent of Spain's 982,015 new car sales in 2010.

Company President James Muir said: "Securing leadership in the Spanish market is a sign of the comeback SEAT is making. This success in the domestic market will help us boost the growth of our brand across Europe."

Meanwhile Managing Director of SEAT UK, Peter Wyhinny, is in equally bullish mood as he reflects on SEAT UK's record performance in 2010: SEAT's stunning sales growth here over the last 12 months - which has massively outperformed the market as a whole - is testament to both the quality of our cars and the commitment of our dealers.

"With one of the youngest volume manufacturer line-ups out there, plus a strong and successful network of dedicated dealers nationwide, SEAT is ideally placed to build on the success of 2010.

"Over the next 12 months I expect us to accelerate our continued growth here in the UK as we look to support SEAT's ambitious plans throughout Europe."