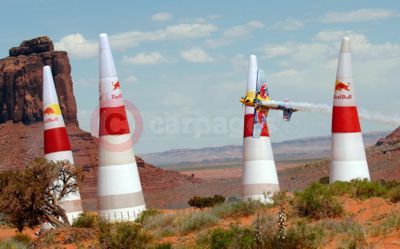 SEAT will become the Official Global Partner of the thrilling Red Bull Air Race, starting from the next race this year in Istanbul on 2nd June.  The Red Bull Air Race is an exhilarating competition in which the world’s most talented pilots challenge each other in a contest based on speed, precision and skill.  SEAT and Red Bull Air Race have signed a three-year partnership contract.

‘We are very happy to announce the co-operation with Red Bull Air Race for the next three years,’ said Erich Schmitt, President of SEAT.  ‘This agreement will further enrich our brand image, following our successful co-operation with Shakira during the first part of 2007.’

This new agreement is designed to enhance the brand image of SEAT, as part of a long-term global sponsorship strategy.  The SEAT brand values are ‘Design-driven’, ‘Sporty’ and ‘Lively’, which means supporting the Red Bull Air Race fits in as well as previous and on-going activities such as Shakira’s European Tour and the World Touring Car Championship.

Apart from creating more brand awareness for SEAT, the races will provide a communication platform for SEAT importers and dealers at the five locations the company will be involved with in 2007.  These comprise Istanbul in Turkey, Interlaken in Switzerland, Porto in Portugal, Acapulco in Mexico, and London, at The O2 (formerly the Millennium Dome).  This major UK event takes place on Sunday 29th July.

The Red Bull Air Races have become huge spectator events.  Last year’s eight races attracted six million people watching on location.  The biggest crowd so far was in Istanbul in 2006, where 1.5 million spectators watched the race.  Expectations for the 2007 World Series are much higher, since it now features 11 races.

SEAT will have a comprehensive presence at the five events, with the SEAT brand seen on the planes, as well as throughout the venue, and on the 70 cars that will be used by the pilots and the organisation.  The most eye-catching vehicle will be a special Leon Cupra ‘follow-me’ car, which will lead planes in and out of the airstrip.