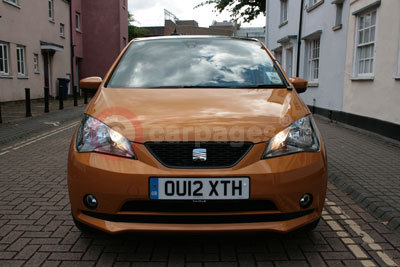 The SEAT Mii is one of a triplet of essentially similar Volkswagen Group models that are different in detail and in the badges they wear. The other two are the VW up! and the Skoda Citigo. All three share the same structure underneath their near-identical exteriors, and use the same engines. So the choice between them comes down mainly to aesthetics, the detail variations in cabin design, and the badge you prefer your car to wear.

Where does the car’s unusual name Mii derive from? Various explanations have been put forward, but the most likely inspiration is the Mii that is a personalised digital avatar used by Nintendo for its Wii and 3DS video game consoles. It is a trendy enough name to appeal to young drivers and anyone youthful enough to engage with a screen-based exercise programme.

The Mii is Spanish-based SEAT’s smallest model, and it is Tardis-like in room it packs into a very diminutive body size, just three and a half metres long and a bit over one and a half metres wide. To put its size in context, the Mii is shorter than a modern MINI and only very slightly longer than a tiny original Mini. It is quite a bit taller than most small cars, though, which helps create the good interior space that makes it feel bigger inside than its exterior measurements suggest.

Its engine is a three-cylinder, one-litre unit. We tested it in 75 bhp form, but there is also a slightly lesser-powered 60 bhp version. The gearbox is a five-speed manual. There are two body styles, both hatchbacks with three or five doors. The four levels of trim and equipment are S, SE, Ecomotive and Sport. Prices start from £7,925 for a Mii S 1.0 3-door. The top-spec 3-door Sport model is £10,080. Five-door versions of the Mii start at £8,325, and rise to £10,480 for the range-topping Mii Sport 1.0 5-door.

Don’t expect sparkling performance from the little Mii. Its main attractions are good economy and value for money rather than sheer outright pace. Even so, its little 999 cc engine, with three cylinders and six valves, gives it a reasonable amount of get-up-and go. The top speed is a perfectly respectable 106 mph, so gives you plenty in hand to cruise at the legal British limit. The acceleration from 0-62 mph is quite leisurely at just over 13 seconds, but this is not the kind of car for indulging in a traffic lights Grand Prix.

Power output from that little one litre engine is 74 bhp, and the torque delivery is 70 lb ft. CO2 output is 108 bhp, so it is in a lowly group 2 for the annual VED tax disc. The five-speed manual gearbox is slick and efficient, with light silky changes. The steering is not overly-endowed with feel, but it is comfortable and tidy, with no strain for nipping around town or manoeuvring into parking spaces.

This is a 8-year+ news article, from our SEAT archive, which dates back to the year 2000.

If in doubt check with your local SEAT dealer as car prices and technical data will have changed since 2012.

SEAT Mii Images may not be UK specification cars. Colours and exterior and/or interior elements may differ from actual models.