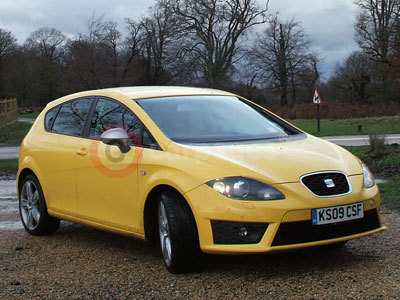 I am often asked what car I would buy, if I had unlimited funds. Well, apart from a Lancia Stratos for my other half, there would have to be a SEAT Leon on the list. Preferably a Cupra but the FR version is almost as good.

And I'm not the only one who thinks so because, until the new SEAT Ibiza arrived on the scene in the summer of 2008, the SEAT Leon was the company's best-seller in the UK. Sales figures for the two cars remain close but the new revisions to the SEAT Leon could put it in the lead again.

Furthermore, the SEAT Leon has made quite a considerable mark in the WTCC, winning both Manufacturer's and Driver's titles in 2008. And apparently, the SEAT Leon 2.0 TDI was the first diesel-engined car to win races in BTCC and WTCC Championships. Coincidentally, this is the same engine that is in the test car; albeit in its original, un-tweaked state.

With the new revisions, SEAT has brought in another engine bringing the total up to nine: five petrol and four turbodiesel units.  There is a new version of the 1.4 petrol unit that produces 85 PS and now takes the entry-level position. Both this and the 102 PS, 1.6 petrol engine are mated to a 5-speed manual gearbox.

Then we move on to the first of the updated units, the 125 PS, 1.4 TSI. It has variable geometry turbo that offers 200 Nm of torque between 1,500 and 4,000 rpm, which is well into diesel territory. Not only that but it is easy on fuel and emissions.

Next in the petrol line-up is the new, 2.0 TSI FR, which is part of the new family of Volkswagen Group engines. The previous 2.0 TDSI unit produced 200 PS but with this new lighter, version it has increased to 211 PS and 280 Nm (1,700-5,200 rpm). It is usually mated to a 6-speed manual gearbox but there is also the option of the 6-speed DSG with sequential shift and steering-wheel-mounted paddles thrown in for good measure. The 240 PS version of the 2.0 TSI engine, that powers the SEAT Leon Cupra, remains unchanged in its outright sportiness.

The common-rail diesels start with the 1.9 TDI. It comes with two outputs; 90 PS and 105 PS. This latter is used in the Ecomotive versions where it offers extreme frugality and CO2 emissions of 119 g/km and returns somewhere in the region of 62.8 mpg on the combined cycle.

The 2.0-litre turbo diesels are also available in different outputs; 140 PS and 320 Nm and the version that powers the test car, 170 PS. Like its TSI counterpart, the 140 PS unit is also available with the clever DSG gearbox, while the 170 PS is only available in the FR.