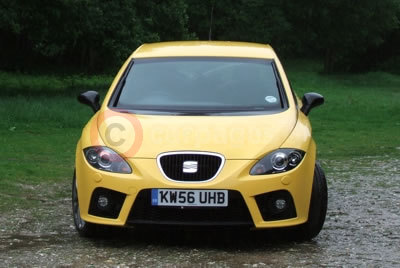 When the new SEAT Leon went on sale in September 2005, the question on many lips was, ‘when are we going to see the Cupra R version?’

As of March, this year, the wait was over and fans of the old model can rest safe in the knowledge that there is now a replacement. I make no secret of the fact that the old Leon Cupra R was, and still is, my all-time favourite car; however, I will try to be objective.

Before moving on, an explanation about the new badging. The new Cupra is the equivalent of the old Cupra R and the FR version replaces the previous Cupra. SEAT tells at that there are no plans ‘at present’ for a new Cupra R.

So, until there is further news on an even more powerful version, the Cupra maintains its status as the company’s most powerful production car to date. Unlike the FR, there is only one engine option and that is the 2.0-litre T FSI unit. This is also found in the FR where it produces 200PS (197bhp) but in the Cupra the output is increased to 240PS (237bhp) between 5,700 and 6,300rpm along with 300Nm (221 lb ft) of delicious torque in a large band, that stretches from 2,200 to 5,500rpm. At the moment, this is the only engine in the Volkswagen Group to produce such power from this engine.

The reasons for the increased performance over the FR are; a new ECU, a larger turbocharger, larger injectors and to cope with the extra torque, the gear ratios of the 6-speed, manual ‘box have been tweaked.

The top speed is 153mph (where legal) and it takes 6.4 seconds to complete the 0-62mph dash. You get the best of both worlds with this car – plenty of performance and sensible fuel figures of 24.8, 43.5 and 34.0mpg for the urban, extra-urban and combined, respectively. CO2 emissions are measured at 199g/km, which puts the Cupra in VED Band F and the insurance category is 17E.

Compared to the ‘standard’ Leon, the Cupra gains larger front air intakes with honeycomb grilles, which allow cooling air to the engine and huge, 17-inch front brake discs. These are larger than the Brembo's, used on the previous car and have alluring red callipers, which are clearly visible through the spokes of the 18-inch alloy wheels.