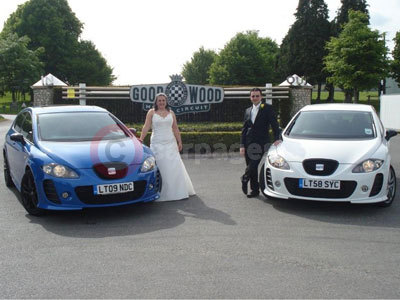 Stephanie Garner and Peter Janes With Their SEAT Leon Cupras

A motor-mad couple have made their beloved SEAT the centrepiece of their entire wedding.

Stephanie Garner and fiance Peter Janes, both 34, were so in love with their super sporty SEAT Leon Cupra K1 they decided to build their whole wedding around it.

First, the couple from Gartson near Watford, Herts, opted to have their ceremony at the historic Goodwood racing circuit in West Sussex - a venue befitting the awesome 240 PS K1 which is capable of a heart-stopping 153 mph.

Then they each roared into the venue in matching models - Stephanie in the couple's own Candy White SEAT Leon Cupra K1 and Peter in a striking Speed Blue version loaned to them by SEAT dealer Letchworth Autoway Centre.

Continuing the theme, Stephanie walked down the aisle to Fleetwood Mac's 'The Chain' - theme of the BBC's Formula One coverage - where Peter was waiting at the altar with a chequered flag.

And in the evening, the couple rejected the traditional disco and instead opted for a giant Scalextric competition featuring miniature versions of SEAT's firebrand flagship.

But the minute the formalities were over, the newlywed couple couldn't wait to get back behind the wheel and hit the open road.

They are currently enjoying their honeymoon, a two-week drive around England and Scotland!

After the ceremony, an excited Stephanie explained: "We both love our Cupra K1 so much that it just seemed natural to make it a part of our wedding ceremony.

"We work for the same company and so every day on the way to and from work there's a fight over who gets to drive.

"We're both big motorsport fans, and so being able to have our ceremony at Goodwood was brilliant. Then, when it came to arranging a car, it was a no brainer. Our K1 is Candy White and, for us, it's better than any Rolls-Royce."