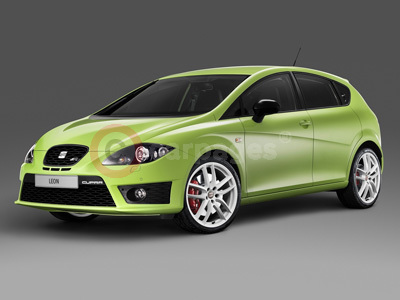 SEAT is preparing to unveil its most potent model to date with September's Frankfurt Motor Show debut of the awesome new SEAT Leon Cupra R.

Naturally, the new SEAT Leon's 265 PS direct injection 2.0 TSI engine is the star of the show boasting not only tremendous power, but also easy torque transmission and remarkable flexibility. Among the four cylinder 16V unit's key features is a new, high-pressure fuel pump injector to satisfy its greater performance demands while also allowing it to fully comply with strict EU5 emissions standards.

Transmitting that urge to its driven front wheels, the SEAT Leon Cupra R is capable of prodigious performance. The zero to 62 mph time, for instance, is a formidable 6.1 seconds, while the top speed of 155 mph is comfortably adequate. All this, and yet the new SEAT's combined fuel consumption figure is put at just a shade under 35 mpg.

Inside and out, the exclusive nature of the Spanish maker's new model is obvious to the enthusiast thanks to the distinctive letter 'R' on the central grille and at the lower right of the hatch. The all-important initial also appears inside, on the right instrument dial and the remote control key. Meanwhile, the exclusive Cupra logo graces the front bumper, the centre of the hatch and, inside, the steering wheel and seat backrests.