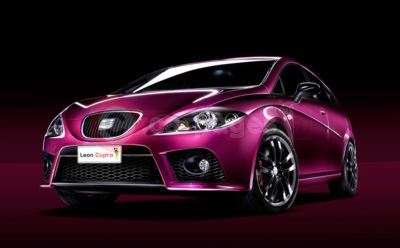 Glamorous ‘Hips-Don’t-Lie’ pop star, Shakira, has helped SEAT design a unique Leon Cupra as a competition prize, in order to raise money for her own charity. At a press conference in the Max Schmeling Halle in Berlin at the weekend - officially kicking off her European tour - SEAT and Shakira revealed the special Cupra that will benefit the star’s charity, the Fundación Pies Descalzos (Bare Feet Foundation).

The car, aptly named the Leon Pies Descalzos, is immediately identifiable by its striking lilac metallic paint, a colour also highlighted on several details inside. In addition, the interior features part-leather trim incorporating the Pies Descalzos logo. This emblem also graces the B-pillar, while polished black paint is used on the Cupra’s 18-inch alloy wheels.

SEAT announced its partnership with Shakira at the end of last year, a co-operation which involves supporting her European Tour, as well as her charity work. Her UK concert will also be the last venue of the tour, and will be held at Wembley Arena on 18th March.

‘The support for Pies Descalzos is very welcome,’ said Shakira. ‘The need for education and proper nutrition for the children in my home country of Colombia is very big and I trust that SEAT’s initiative will aid a lot.’

‘By supporting Shakira’s charity foundation, we show our social responsibility,’ commented Erich Schmitt, SEAT’s president. ‘All European countries visited by Shakira on her tour will incorporate the possibility to donate money to Pies Descalzos.’

The Leon Pies Descalzos was developed by SEAT in co-operation with Shakira. In the design process the pop star acted as a consultant on colours and materials, to create a totally unique car that one lucky person will be able to win at the end of the fundraising campaign in May.

The fundraising competition will be highlighted across many communication channels as part of SEAT’s promotion of the Shakira partnership. It will end on 15th May and the Leon prize car will be presented to its winner at the Barcelona Motor Show in June.

Those entering the competition will automatically donate one Euro (or one pound in the UK) to the foundation by sending their details in an SMS message to a dedicated number in each country in which Shakira is performing. For the UK, the number is 81161. Alternatively, a donation for any amount can be made at the Shakira/SEAT website www.catch-the-fever.com.

The base for the car is the new Leon Cupra, which is due to hit UK showrooms at the beginning of March. Developing 240 PS, the new Cupra is SEAT’s most powerful model to date, and is the flagship of the marque’s sporty range of cars.

The Fundación Pies Descalzos is devoted to providing opportunities for deprived children in Colombia. It originated in Barranquilla, the hometown of Shakira on the Caribbean coast of Colombia, and is now reaching other parts of the country.

The goal is to improve the education, nutrition and lives of the thousands of displaced children who are living in perilous conditions in Colombia.

Shakira, one of today’s most successful, young and famous global pop artists, chose SEAT, the Spanish automotive company, as the main sponsor of her 2007 Shakira Oral Fixation European Tour. The tour started last week in Hamburg and will end in London, travelling through more than ten European countries.