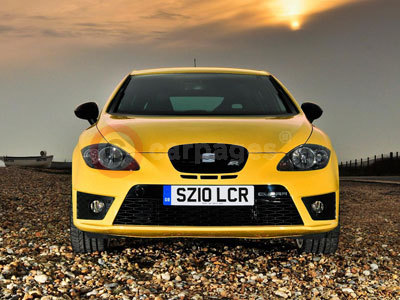 The new SEAT Leon Cupra R is preparing to roar into UK showrooms becoming, in the process, the most powerful production car yet offered by SEAT UK.

With 265 PS available from its 2.0-litre turbocharged petrol engine, the fire-breathing new SEAT Leon resurrects the iconic Cupra R badge last seen on the sleek Spaniard back in 2006.

More than that, the car also becomes SEAT's quickest-accelerating model to date with a 0-62 mph time of just 6.2 seconds while the top speed, where legal, of 155 mph is also SEAT's highest ever 'flat out' figure.

A revised high pressure fuel injection pump and reworked ratios within the SEAT Leon's crisp six-speed manual gearbox are further indications of the careful re-engineering that has gone into this SEAT record-breaker.

Official CO2 emissions from the SEAT's EU5-compliant engine stand at just 190 g/km - an exceptionally low figure for a car with such exceptional performance - while official figures show combined economy to be just a whisker off 35 mpg, similarly compelling for such a spirited hot hatch.

Beyond the raw performance and economy statistics is the new SEAT Leon's unique styling which has been calculated to underscore its exclusive nature. Bespoke styling changes, inside and out, elevate the new SEAT Leon Cupra R's kerbside appeal.

The addition of sporty twin central exit exhaust pipes within a customised rear diffuser, discreet extended high level rear spoiler, subtle 'R' badging and the careful application of gloss black highlighting inside and out give the forthcoming Leon its exclusive appeal.

Offered in a typically sunny selection of eye-catching colours, the Catalan creation arrives with the option of new Custom Palette shades including a stunning new metallic yellow called Tribu.

UK pricing for the new SEAT Leon Cupra R is confirmed at £25,205, with orders books opening at dealers nationwide on Thursday 1st April 2010.

Welcoming the UK arrival of the brand's most extreme model to date, SEAT UK Product Marketing Manager Andy Medcraft said: "The engineering and styling revisions that have gone into the new Leon Cupra R underline our determination to make this exceptional new car a true class leader.

"The car neatly encapsulates everything that sets SEAT apart from the plethora of other hot hatches around and I'm sure that existing Leon owners, and drivers who have yet to try SEAT, will be thrilled to see its arrival in British showrooms."