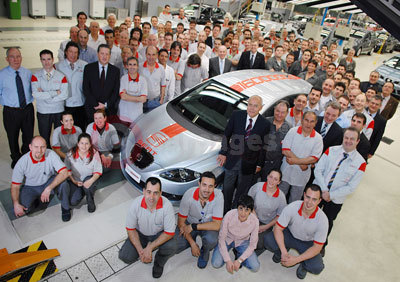 On the 25th January 2008, the Spanish car maker SEAT notched up another massive milestone as its 16 millionth model rolled off the production line at the firm’s modern Martorell plant, near Barcelona.

The landmark motor, a silver SEAT Leon Ecomotive equipped with a frugal 105 PS 1.9 TDI engine, is destined to be sold on the Spanish market.  This ultra-clean model, which has CO2 emissions of just 119 g/km and is capable of up to 76.3 mpg on the extra urban cycle,  is sister to the new Ibiza Ecomotive which arrives here in the spring. The ‘green’ Leon is due to arrive on UK shores later in 2008.

Speaking at the car’s line-end celebration, SEAT President Erich Schmitt highlighted the upward trajectory of the company’s production activities: ‘not only because of technological advances but also the high quality in the products and processes and environmental protection.’

The Leon Ecomotive is, almost literally, a world away from the very first SEAT model – a 1400 – that came off the assembly line at the company’s base in Barcelona’s Zona Franca on 13th November 1953.

At that time the firm’s 900 workers managed a production rate of five cars per day.  Today, by contrast, the company has a workforce of around 12,000, including the staff at the SEAT Technical Centre, and produces about 2,000 units daily at the Martorell plant.

Martorell is home to the full line-up of today’s SEAT models with the exception of the Alhambra, which is manufactured at the Volkswagen Group plant in Palmela (Portugal).

The celebration of this latest milestone comes at a time of strong growth for SEAT, with new models arriving such as the Ibiza and Leon Ecomotive.  The firm is also looking forward to the prospect of its first full SUV, based on the stunning Tribu concept car, which is likely to debut next year.

SEAT also has an ambitious expansion plan, laid down in its Strategy 2018, which envisages increasing sales to 800,000 within a decade.