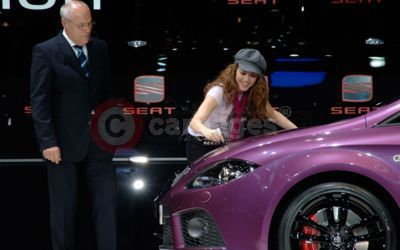 SEAT injected a big dose of ‘auto emoción’ into the Geneva Motor Show this week when pop songstress Shakira made an appearance on the Spanish car maker’s stand, along with Erich Schmitt, President of SEAT S.A.  The rest of the show practically emptied as a huge crowd assembled around the SEAT stand.

The Columbian pop singer - one of the top-selling artists in the world today - made the visit to sign the SEAT Leon Pies Descalzos, a one-off raffle prize car that is helping raise funds for her charity, the Pies Descalzos (Bare Feet) Foundation.

Shakira chose SEAT to be the main sponsor of her 2007 ‘Oral Fixation’ European Tour, which comes to London Wembley Arena on Sunday 18th March.  As part of the association, SEAT is enabling Shakira to raise even more money for her charity - which helps deprived children in her home country - by donating the SEAT Leon raffle prize.

The colours and trim of the unique Leon Cupra were chosen by Shakira herself, and include vibrant purple paintwork, black polished alloy wheels and a colour-coordinated interior.  By signing the bonnet during her appearance in Geneva, she added a final personal touch.

In order to be in with a chance of winning the car, simply text the word ‘SEAT’ to 81161 at a cost of £1.  Alternatively, a donation can be made at www.catch-the-fever.com, where full details of the competition can also be found.  So far, the global campaign has raised over 100,000 Euros, and much more is hoping to be collected before 15th May, when during the Barcelona Motor Show the Leon Pies Descalzos is handed over to its lucky winner.