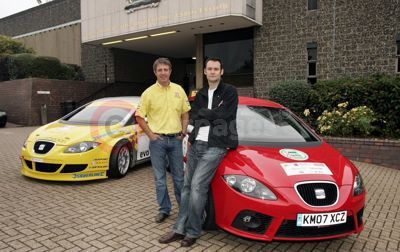 The BTCC driver took part in order to highlight that driving an economical car doesn’t have to mean economising on fun.  By taking the Leon FR TDI with 170 PS – the best-selling Leon variant in the UK, and a true hot hatch – Jason demonstrated exactly that, achieving an impressive result of 55.53 mpg over the two-day 329 mile course – a 17.9 % improvement on its official mpg figure.

The sporty-looking Leon, which has coupé-like styling thanks to its rakish profile and hidden rear door handles, can hit speeds of 135 mph and sprint from 0 to 62 mph in just 8.2 seconds.  Yet with its advanced high-pressure injection diesel engine, this spirited Spaniard has a thrifty official combined economy figure of 47.1 mpg.  In addition, a DPF (Diesel Particulate Filter) removes any remaining traces of particulates from its exhaust.

Richard Yarrow was pleased with their result:  ‘On the first day we drove like saints and, according to the trip computer, achieved around 57 mpg.  But on the second day we decided to see what would happen if we drove the Leon in a more realistic style!  By driving up to the speed limit, but using basic economy driving techniques such as planning ahead, we still recorded 53 mpg.  It just goes to show that improving on the manufacturer’s official mpg figure doesn’t have to be hard work.’

Jason Plato agreed: ‘This was somewhat different from racing cars around a track!  Instead of chasing speed, you’re chasing efficiency – but the concentration levels still need to be high when trying to eke out the most mpg.  Having said that, our performance on the second day just goes to show that with only a few minor adjustments to driving style, anyone can save fuel without adding hours onto their journey.’

The AA/ALD Automotive mpg Marathon, now in its fifth year, tracks through Hampshire, Somerset and Devon, and comprises a blend of city, motorway and cross-country driving to simulate typical driving conditions.

Event organiser Ross Durkin, publisher of Fleet World, said: ‘Jason proved a number of things – notably that he is a very skilful driver both on and off the race track, but also that the Leon FR TDI is capable of delivering a thrilling ride and impeccable handling without costing the earth.  It must have been a strange experience for other participants to overtake a racing driver, but Jason was a good sport and added a touch of excitement to the mpg Marathon.’

Jason currently sits at the top of the leader board in the BTCC by nine points, with just one nail-biting race weekend to go – at Thruxton, on 13th/14th October.  He is the only driver to have scored points in all 27 races this season and has won six in total.  After 243 BTCC races, the next three are arguably the most important – as he tries to lift the BTCC Drivers’ title for the second time, on his 40th birthday.