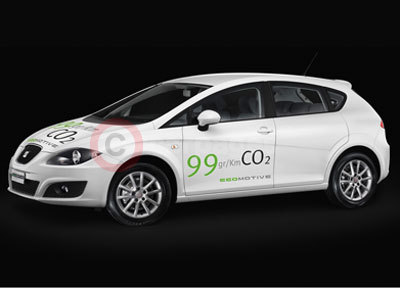 SEAT is once again grabbing the spotlight at Geneva with the unveiling of an exciting new concept car.

The Swiss debut of the Leon Ecomotive Concept, a dramatic development of the existing low emissions, high economy family five-door, underlines SEAT's growing stature as a motor maker that appeals across the spectrum - from exceptional economy to outstanding performance.

These significant improvements in both emissions and economy over the current SEAT Leon Ecomotive (119 g/km and 62.8 mpg combined) come courtesy not just of that new 105 PS turbodiesel engine, complete with DPF particulate filter, but also an array of clever fuel-saving innovations.

Among the new features debuting on the SEAT Leon is an Auto Start/Stop function. When the car comes to a halt - for instance at a traffic light - and the driver selects neutral and takes his foot off the clutch, the Start/Stop function automatically switches off the engine. As he prepares to move off again and depresses the clutch, the engine is re-started and the car can be driven as normal.

The driver's kept up to speed on the system's operation via a special readout in the instrument binnacle, which also shows the optimum gear for maximum economy at any given moment.

This development alone can deliver fuel savings of as much as four miles per gallon around town, without the need for the SEAT Leon's driver to make any changes to their driving style.

As well as the slick Start/Stop system, the car being unveiled at Geneva also includes a form of brake energy recovery - harnessing energy generated during the braking process to save fuel by reducing the usual drain on engine power that stems from a conventional alternator.

Of course many of the existing fuel- and emissions-saving techniques employed in the existing SEAT Leon Ecomotive find their way into the new concept car: lengthened gear ratios, the use of low rolling resistance tyres and optimised aerodynamics all feature.

The new Concept naturally includes the same elegant design revisions as those seen across the revised SEAT Leon and SEAT Altea family range, also making their debut in Geneva.

The SEAT Leon Ecomotive Concept follows hot on the heels of the recently-unveiled SEAT Leon Twin Drive Ecomotive prototype which made its debut at the SEAT Technical Centre in Martorell, near Barcelona, in January 2009.

That concept showcases SEAT's work towards producing vehicles which run on electricity in urban areas, switching seamlessly to conventional petrol or diesel power for longer trips out of town.