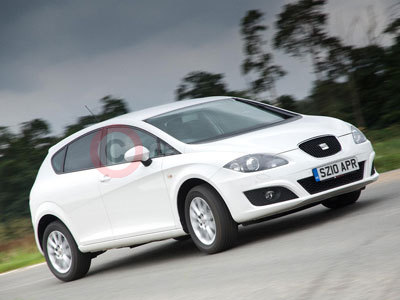 SEAT is today unveiling the first details of an exciting new SEAT Leon Ecomotive Prototype which adds a radical twist to the idea of maintenance-free motoring.

The one-off prototype has been cleverly re-engineered to include a 545-litre (120-gallon) fuel tank which, working on the basis of the new Ecomotive's extra urban economy figure of 83.1 mpg, gives the ultra-green Leon the unique ability to cover a full 10,000 miles between fill-ups.

As a result this exceptional SEAT Leon Ecomotive, which like the production version boasts a new 1.6-litre TDI common rail powerplant as well as new start-stop technology, is able to offer many of its lucky owners the luxury of never having to visit the filling station again.

Since the SEAT Leon comes with a 12-month/10,000-mile service interval as standard, the new prototype model need only ever be fuelled by a SEAT dealer. As such, the car is not fitted with a conventional fuel filler flap or cap, the diesel instead being refilled via a special nozzle in the boot.

Even higher mileage drivers covering, for example, 12,000 miles a year could collect their car in, say, June and then look forward to ten months of unstoppable motoring before their vehicle's first scheduled 10,000-mile service and an April fuel stop.

Of course to accommodate this extra-large fuel tank SEAT's engineers have had to significantly rework the SEAT Leon's interior layout. Out have come the rear seats to be replaced, instead, by the enlarged tank which fits neatly into the space vacated by the three seats.

A handy luggage space sits atop the extra-large fuel tank, meaning the Leon Ecomotive Prototype remains as practical as it is economical.

Other important revisions have been made to the SEAT's standard suspension set-up of course, allowing it to maintain its sporty handling while carrying the increased fuel load. The SEAT Leon's already efficient brakes have been uprated, too.

As ever, safety is paramount and SEAT's engineers have worked hard to ensure the concept doesn't compromise passenger or pedestrian protection. Significant reinforcement of the SEAT Leon's already robust passenger protection measures ally to the fact that even should the tank be ruptured in a serious accident, a characteristic of diesel fuel is that although it will burn in open air using a wick it will not explode and does not release a large amount of flammable vapour.

The clear advantage of the prototype SEAT Leon is, of course, never having to queue at the filling station, never again donning the plastic disposable glove before refuelling and never waiting in line to pay. In the case of the new car, refuelling takes place as a matter of course when the car visits a SEAT dealership, with dealers set to offer handy fuel payment plans alongside the existing fixed price service plans.

Head of SEAT UK Press & PR, Mike Orford, said of the intriguing prototype: "Clearly, you'd be a fool not to see the benefits of this new Leon Ecomotive.

"We expect the first drivers will be tickled pink when the car goes on sale here."