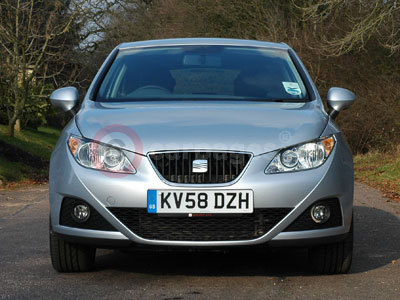 There has been a previous 'sportier' three-door SEAT Ibiza, but now SEAT has made a distinction between the two models calling the three-door car the SEAT Ibiza SC (Sports Coupe).

SEAT's new Design Director Luc Donckerwolke, a former Lamborghini stylist with iconic supercars such as the Gallardo to his name has worked his magic on the new Sports Coupe.

Although based on its five-door brother there are significant exterior styling differences between the two cars.

The new SEAT Ibiza SC is larger than the old three-door Ibiza, it is 99mm longer than the previous car (but shorter than the new five-door car) and it rides 22mm lower to try and prove its sporty credentials. Even the track is wider, 30 mm more up front and 33 mm more at the rear to give the car a more 'planted' stance.

Currently there are three trim line ups starting at S, rising through to the SE and Sport models. Prices start at £8,995.

The 1.6-litre (105 PS) SEAT Ibiza can be specified with a seven-speed DSG system, which offers both a full automatic and sequential manual gear changes. We drove the 1.4 litre petrol engine with a five speed manual gearbox - this is the engine which is predicted to be the best seller in the SEAT Ibiza SC range. The 1390 cc unit produces 85 PS at 5,000 rpm and delivers a 132 Nm of torque at 3,800 rpm. This is enough to propel the car from 0-62 mph in 12.2 seconds and then up to a top speed of 110 mph.

SEAT quotes an average fuel consumption figure of 45.5 mpg and official CO2 emissions are put at 149 g/km. But we only averaged, over a 7 day period, 33.3 mpg which is not particularly good for a 1.4 petrol engine, although we would expect to see this improve with an increase in mileage and age.

We found the SEAT Ibiza SC's 1-4 litre engine to be a little under powered on the motorway and up some gradients but overall the engine is quite quiet, the gearbox is easy to use - so no real complaints - perhaps a little noisy under load.