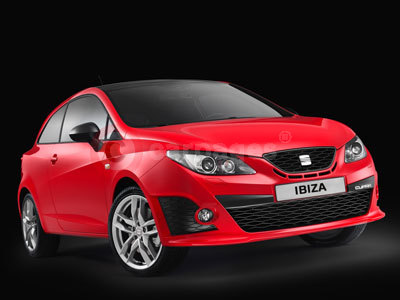 SEAT’s relentless assault on the supermini market continues amid the glamorous surroundings of the Paris Motor Show with the unveiling on 2nd October 2008 of the jewel in the sporty Spanish car maker’s small car crown: the all-new Ibiza Cupra.

Boasting numerous important first-in-class advances, trademark sporty styling from the pen of SEAT Design Director Luc Donckerwolke and performance potent enough to satisfy the most hardcore of hot hatch fans, the Ibiza Cupra powers to pole position in its class.

Based on the SportCoupé (SC) three-door body shape, the now familiar ‘Arrow Design’ concept which helps all new Ibizas stand out so clearly on today’s cluttered roads is augmented on the Cupra by a newly-designed bumper and integrated spoiler featuring large air intakes for easy cooling of both the engine and the large front disc brakes.

This particular Ibiza’s nose is rounded off with an eye-catching U-shape of additional air vents beneath a specifically-designed central grille featuring a honeycomb structure and black surround.  SEAT further emphasises the exclusive nature of its new model with black inserts on the front bumper, one of which features the word ‘CUPRA’, a trademark of the company’s top-performing model.

The car’s overtly athletic looks are unquestionable.  In profile, for instance, the features that stand out include striking 17” alloy wheels not dissimilar to those seen on the SEAT Bocanegra concept car unveiled earlier this year at the Geneva Motor Show.  Visible through each wheel’s five double-spoke structure are impressive disc brakes and four-pot red callipers, while the wheels themselves are shod with low profile, sporty 215/40 tyres.

The rear end features prominent ‘shoulders’ – a notable trait of the Ibiza SC shape –  which frame the tail lights, as well as an attractive black moulding beneath the bumper to house the number plate.  This incorporates a newly designed, centrally placed trapezoid tailpipe, flanked by aerodynamically efficient, slatted wings.

The centre of the rear hatch sports the word ‘CUPRA’ in suitably bold lettering, and this sits immediately beneath the ‘S’ brand symbol which characteristically doubles as the boot latch.

Inside, the sporty story’s much the same.  The new Ibiza Cupra features an exclusive interior design incorporating a dashboard studded with high gloss ‘piano black’ elements such as the radio panel, the ventilation nozzles and the instrument binnacle hood.  The steering wheel features a flattened base similar to those seen in many a competition vehicle, while its three-spoke structure and side indentations make the height- and reach-adjustable wheel especially easy to grip.

There’s Cupra branding inside, too, of course with a centrally-placed SEAT symbol and the ‘CUPRA’ logo picked out on the wheel’s high gloss central spoke.  Most importantly, though, the wheel also features hi-tech, race-derived steering wheel paddles which the driver can use to govern the car’s standard seven-speed DSG gearbox.

Above the wheel, the instrument binnacle has two newly-designed dials and includes a screen that can display Bluetooth-connected mobile telephone functions, among other features.

Suitably sporty, grippy and supportive seats are another interior highlight of the new Ibiza Cupra.  Trimmed in smart black upholstery and boasting the ‘CUPRA’ logo on the backrest of the front seats, the design and finish is calculated to conjure up images of classic 70’s sports cars.  The front passenger seat is also equipped with the Easy Entry system, where the seat folds down and slides forward at the same time to give easy access to the rear.

The Cupra is brimming with sophisticated technology.  It uses a 180 PS 1.4-litre petrol engine featuring not only a turbocharger but also a supercharger – engineering designed to maximise both power delivery and fuel economy.  Add to this compact yet potent powerplant the fact that it is mated as standard to a seven-speed DSG (Direct Shift Gearbox) transmission, complete with F1-style steering wheel shift-paddles, and the sporting potential of the Cupra becomes obvious.

Generating its top torque figure of 250 Nm from just 1,750 rpm, and maintaining that tidal wave of torque right through to 4,500 rpm, the sophisticated 1.4 TSI is capable of flinging the front-wheel drive Ibiza from rest to 62 mph in only 7.5 seconds.  The top speed, where legal, is 140 mph. Yet all this excitement comes with distinctly modest emissions and excellent fuel economy.  The 1.4 TSI twin charger engine delivers a notable cut in emissions compared with the powerplant used in the previous generation Ibiza Cupra thanks to its small cylinder capacity.  In fact, at a mere 159 g/km, it’s well in line with the brand’s commitment to reducing CO2 emissions on the entire engine range.   Economy, meanwhile, is impressive: 42 mpg on the combined cycle.

With that high performance twin charger powerplant under the bonnet, one of the aspects always likely to require attention with the new Cupra was traction.  To this end SEAT, along with the other Volkswagen Group brands, has developed a new enhanced electronic traction system – XDS.

Combined with ESP and TCS, the new system mimics the operation of a conventional limited slip differential without adding the associated weight or mechanical complexity.  The system anticipates tyre traction loss and swiftly limits power to the wheel that may be losing traction.

The new technology most notably prevents the inside wheel from skidding in curves, reducing understeer and putting the new Cupra at the top of its segment in terms of handling and driving dynamics.

Like the rest of the new Ibiza line-up, the Ibiza Cupra will be manufactured exclusively at the SEAT factory in Martorell, near Barcelona.

UK prices and precise specification details will be announced closer to the new model’s launch during the first half of next year.