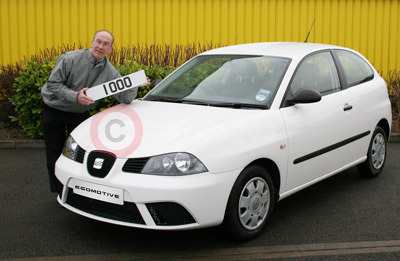 The 55-year-old storage depot worker previously drove a Nissan Micra. He said: "I did my research before buying a new car and decided to go for the Ecomotive because it made the most financial sense.

"The fuel economy and the fact you don't have to pay any road tax were big factors in my decision, but the environmental benefits were also important.

"I also liked the fact that it's a quite a sporty car for something so green and economical.

"Since taking delivery I've been delighted with the car. It's great to drive. But I'm most pleased about the savings I'm making. I used to spend about £70 a month on fuel but now its only about £50. It's great!"

The original shape SEAT Ibiza Ecomotive, which is due to be replaced by new-shape versions in SC and 5dr form later this year, represents SEAT's first foray into the increasingly important area of ultra-low emissions motoring.

Exceptional fuel economy of up to 88.3 mpg (extra urban) and CO2 emissions of just 99 g/km which continue to make it Road Tax-exempt are among the SEAT Ibiza Ecomotive's highlights.

However, the team of expert engineers working at SEAT's state-of-the-art Martorell Technical Centre have been careful to develop the economy champion's virtues without compromising its trademark dynamic and engaging driving experience.

So, the SEAT Ibiza Ecomotive boasts a punchy 80 PS turbodiesel engine capable of powering it from rest to 62 mph in only 12.8 seconds and carrying it on, where legal, to a top speed of 109 mph.

Among the measures taken to achieve the Ecomotive's outstanding economy are software changes to the characterful three-cylinder powerplant's ECU, while particulate emissions are reduced thanks to the addition of a state-of-the-art Diesel Particulate Filter (DPF). Ratios in the SEAT Ibiza Ecomotive's slick five-speed manual gearbox are lengthened, too, making for both more relaxed cruising and improved economy.

This SEAT Ibiza is also made more slippery through the air, with a Cd (coefficient of drag) figure reduced to just 0.30. Special low rolling resistance 14" tyres from Dunlop help reduce road friction.

Outstanding economy does not come at the expense of creature comforts in the SEAT Ibiza. There's no shortage of equipment on board with air conditioning, electric front windows, steering wheel-mounted audio controls for the MP3-compatible single-disc CD/radio and speed-sensitive electro hydraulic power steering all standard.

Of course SEAT is not resting on its laurels and the new generation Ibiza Ecomotive, due in showrooms here in the Spring, goes even further in the quest to slash emissions and improve fuel economy.

While some details and prices for the new models have yet to be confirmed, SEAT is saying that the new Ibiza Ecomotive will be a class leader. CO2 emissions, for instance, become not only joint best in class for a conventional-engined five-seat car, but joint best on the entire car market as they shrink to just 98 g/km.

Economy improves yet further, too, as the new generation car is capable of as much as 94.1 mpg on the extra urban cycle, or 76.3 mpg combined.

SEAT UK Head of Marketing, Steve Robertson, said: "The undoubted appeal of the existing Ibiza Ecomotive is obvious. In delivering a car capable of such impressive economy we have managed to retain SEAT's trademark sporty character and generous levels of standard equipment.

"Add ultra-competitive pricing (current Ibiza Ecomotive costs from £10,765 RRP) and it's easy to see why sales have streaked to the 1,000 mark in such a short time."