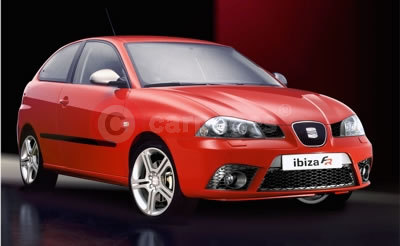 SEAT has released the first images of the new 2006 Ibiza, which benefits from enhancements to its styling, trim and model line-up. The revisions are intended to make an already dynamically-styled supermini even more sporty and desirable, while also bringing it into line with the new generation of SEAT models: the Leon, Altea and Toledo.

The Ibiza is the best-selling SEAT model in the UK, as well as worldwide. It was launched to a fanfare of critical acclaim in 2003, taking the prestigious What Car? awards of Car of the Year and Best Supermini. Its fantastic blend of sporty dynamics, neat styling and great value enabled it to also win the Best Supermini title for the next two years.

The new SEAT Ibiza 2006 has evolved to become racier still. At the front, a new bumper features more aggressive air-intakes, similar in shape to those on the 2006 Leon World Touring Car, and is common to all models except for the Cupra.

At the rear, the exhaust pipes are now more visible (on versions with more than 100 PS), while twin headlights are now fitted as standard. The rear bumper has also been modified, with a mock diffuser look to the lower section adding more dynamism. The ‘Ibiza’ badge is now positioned centrally on the tailgate as on all other models in the SEAT range. The minimum size of wheel fitted has increased from 14” to 15”, as part of the overall enhancement in appearance and sportiness.

The FR model is the most notably revised, and is now even more distinctive. Its increased character is part of an emphasis on the FR brand in 2006, which will also see the arrival of the Altea FR and Leon FR. Behind the Ibiza FR’s front air-intakes lies a honeycomb grille, while the area behind the front registration plate is black. New 17” alloy wheels (up from 16”) and unmistakable ‘FR’ badging complete the picture.

The Ibiza’s extensive engine range remains unchanged, featuring not only the widest diesel range in its sector, but also the most powerful diesel unit outright: the 160 PS TDI powering the Cupra. The petrol range starts with the frugal and smooth three-cylinder 1.2-litre, going up to the fiery 180 PS 1.8 20V T.

Prices and full specification details for the 2006 SEAT Ibiza will be released at the model’s world public debut at the Geneva Motor Show next month.