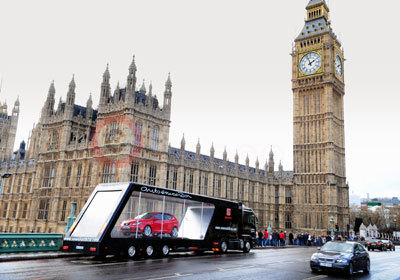 Hot on the heels of its world debut in Spain, and months ahead of its official on-sale date here, SEAT’s stunning new Ibiza supermini has been on a whistle-stop tour of the UK.

One of the very first examples of the five-door car, fresh from the wheels up and designed by ex-Lamborghini stylist Luc Donckerwolke, has been touring the country in a dramatic Perspex case aboard a specially-created, SEAT-branded transporter.

Since Thursday (10th April,) the eye-catching vehicle has been snaking its way around the UK from a starting point in York, calling in at SEAT dealerships and other key venues along the way.

The idea, simply, has been to give British road users a closer look at SEAT’s new star, well ahead of its UK showroom debut in late July.  The tour has also promoted SEAT’s fabulous Ibiza competition, which offers the chance to win a luxury trip for two to the island of Ibiza.

Riding in a custom-built case created here in the UK, and boasting hi-tech lighting and bespoke branding, the eye-catching new car followed a route from the north of England through major cities in the Midlands and South West to London and, finally, the South Coast.

It even found time to call in at Rockingham race circuit on Sunday as the SEAT Sport UK team’s two radical diesel-engined Leons did battle in the latest rounds of the exciting HiQ MSA British Touring Car Championship.

The ambitious tour has given millions of Brits the opportunity to see SEAT’s newcomer while other, similar, trucks have been rolling through major population centres on the Continent.

SEAT Head of Marketing, Steve Robertson, said of the scheme: ‘On the back of remarkably positive responses to our dramatic Bocanegra concept car, debuted at the recent Geneva Motor Show, and the unveiling of the production-ready new Ibiza five-door in Spain, we came up with the radically different idea of this tour.

‘Essentially, we wanted as many people as possible to grab a glimpse, no matter how fleeting, of the new car ‘in the metal’, as that’s where we believe it obviously looks its best.

‘We’re hoping for a great response to our tour, and our dealers look forward to hearing people’s views on the new model after they’ve seen it at first hand.’

More information about the Ibiza’s unique UK tour, as well as many more details of the all-new five-door supermini and full competition entry instructions, are available at www.newseatibiza.com