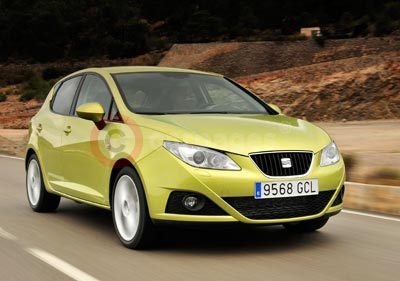 SEAT is celebrating a brace of impressive European awards for its all-new Ibiza supermini after judges in both Germany and The Netherlands voted it top of its class. Executives from the Barcelona-based car maker travelled to Berlin to collect a prestigious 'Golden Steering Wheel' awarded by influential German newspaper Bild am Sonntag - one of Europe's biggest-selling titles.

Nominations for the final five cars in each category were voted on by readers of the Sunday newspaper before going on to be judged by an expert panel of drivers and celebrities including former rally and race ace Walter Röhrl, and ex-F1 driver Hans-Joachim Stuck.

The Ibiza came out tops in the small car class after being judged best in dynamics, design comfort and handling. The SEAT's low CO2 emissions and outstanding value for money also helped it to the title.

Receiving the award in Germany, SEAT S.A. Vice President of Research and Development, Frank Bekemeier, said: 'The Golden Steering Wheel awarded to the Ibiza is a great honour for the whole team.'

Meanwhile, the elegant Ibiza 5dr had been named 'Compact Car of the Year' by the Dutch automobile club ANWB. Monthly magazine De Kampioen, edited by the ANWB for its members, tested a five-door SEAT Ibiza 1.4 SE against a basket of top competitors including the new Ford Fiesta, Mazda2 and Alfa Romeo MiTo. The judges' verdict was clear: 'The Ibiza is one step ahead of its rivals.'

The SEAT's fine design, exceptional quality and extensive standard equipment helped it secure top spot in the Dutch test, with the ANWB judges praising in particular its 'big car' features such as the availability of ESP, EBA, Hill Hold Control and Tyre Pressure Warning.

SEAT UK Head of Marketing, Steve Robertson, said of the Ibiza's growing haul of European awards: 'The fact that independent judges in both Germany and Holland have put Ibiza top in such a competitive sector shows the tremendous appeal of the car.

'SEAT's push for quality and value, our famous reputation for high levels of standard equipment and our determination to make the Ibiza the most engaging, enjoyable drive in its class clearly make the Ibiza a winner.'