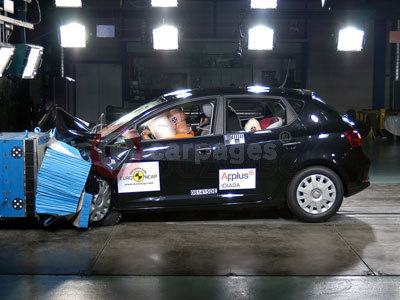 The new SEAT Ibiza is officially one of the very safest cars in its class, following its five-star rating in the stringent Euro NCAP tests.

The maximum five stars were awarded for the passenger protection test, with a four-star rating for child protection and three stars for pedestrian protection.  The collective result is one of the very highest in the supermini class.

Like all new Ibizas, the test car was fitted as standard with driver and passenger airbags, as well as innovative new head-thorax side airbags, which do the job of both side and curtain airbags.  It also featured ABS, TCS (Traction Control System), front seatbelt pre-tensioners, front passenger seatbelt warning buzzer and rear Isofix child seat anchorage points.

The Ibiza was subjected to three tough procedures, from which it emerged with its five stars: frontal impact, side impact and pole impact.  A solid 14 out of 16 possible points were received for the frontal test, the highest possible score of 18 for the side impact test, and 2 out of 2 for the pole test.  The grand total is 34 points – an impressive 94% result.

The safety efforts of the large team at SEAT’s Technical Centre in Martorell have clearly produced outstanding results for the new Ibiza, which include the 38 points it received for the child protection tests.  This equates to a class-leading four-star rating in this area.

Pedestrian protection is an area that benefited from close scrutiny in the development stages of the eye-catching new SEAT.  Considerable improvements have been made to two impact sites – the bonnet and adjacent areas, and the bumper – which helped the new Ibiza achieve 19 points, leading to a three-star rating.

The new Ibiza was unveiled at the recent Madrid Motor Show to a rapturous reception, with UK sales starting on the 16th July 2008. Prices and full specification details will be announced shortly before the on-sale date