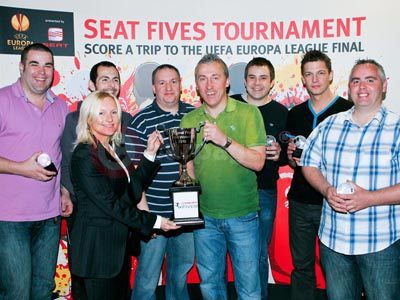 SEAT Five A Side Tournament Winners

SEAT's successful Fleet and Business Sales team is offering wannabe footy stars from the fleet and leasing industry the chance to scoop VIP tickets to the SEAT-sponsored UEFA Europa League Final by showing off their own soccer skills.

Teams from across the corporate car world are being invited to register for SEAT Fives after which they will be pitched into five-a-side battle. The eventual winners will scoop a once-in-a-lifetime VIP trip to the UEFA Europa League Final in Dublin.

The top team's all-expenses-paid trip to the imposing Aviva Stadium will see them witness two of Europe's biggest teams vie for ultimate UEFA Europa League glory on 18th May 2011.

But the route to the final won't be easy. The winners will have to dribble, kick and - most importantly - score their way through the qualifying regional rounds. After that comes the national final which is set to be held at SEAT-sponsored Fulham FC's impressive Motspur Park training ground on 17th April 2011.

No-one knows better what's in store for this year's entrants than last year's winners, Inchcape Fleet Solutions, who scooped an unforgettable night at the 2010 UEFA final between Atletico Madrid and Fulham in Hamburg.

Pete Lines, of Inchcape Fleet Solutions, said: "Taking part in SEAT Fives was a fantastic experience and all the lads really enjoyed themselves. Our games were hard but fair and the competition was intense but it was all worth it and we had an unbelievable night at the final. We'll definitely be entering again this year!"

Nick Andrews, SEAT's Head of Fleet and Business Sales, said: "SEAT Fives got off to a flying start last season and the competition among the country's fleet and business car operators was particularly fierce. This year we're hoping even more teams will sign-up as the trip we have in store for the winners will be one they'll remember forever."

Entry to SEAT Fives Fleet and Business Sales category is free, but spaces are limited and going fast. Teams must consist of seven people (five players and two subs), all of whom must be available for qualifying rounds and the final on 17th April 2011.