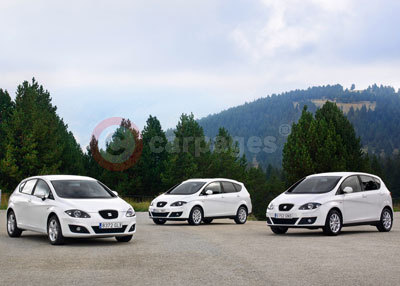 The three newcomers, which join class-leading Ecomotive versions of the slick SEAT Ibiza supermini and practical Alhambra seven-seat MPV, are the latest offerings in the Spanish maker's mission to produce among the world's most environmentally responsible vehicles.

The modified versions of the new SEAT Altea and SEAT Altea XL on show in Germany have a lot to live up to, as SEAT's existing Ecomotive models are among the 'greenest' cars in their respective classes. Today's SEAT Ibiza Ecomotive, for instance, emits a joint best-in-class 98g/km of CO2, while the capacious and ultra-practical seven-seat SEAT Alhambra Ecomotive registers a remarkably low 159 g/km of CO2.

The three newcomers making their public debut in Frankfurt all feature the very latest 105 PS 1.6-litre TDI CR engine, and boast both a DPF particulate filter and cutting edge common rail fuelling technology as standard. Together, these features help to considerably improve both fuel consumption and emissions.

The new SEAT Altea Ecomotive and SEAT Altea XL Ecomotive record official emissions figures of just 119 g/km CO2 making them among the most environmentally responsible models in their segment.

Meanwhile the new, second generation, SEAT Leon Ecomotive improves significantly on its previous already impressive CO2 performance: at only 99 g/km in official tests, the new model is a full 20 g/km better than its predecessor thanks to the addition of Auto Start/Stop and energy recuperation functions, allied to the engineering advances provided by the 1.6-litre common rail diesel engine.

Integral to the new SEATs' exceptional economy is the Spanish brand's use, for the first time, of Auto Start/Stop technology. When the car comes to a halt, at a red traffic light for example, the driver selects neutral and lifts his foot off the clutch. At this point the Start/Stop system kicks in and automatically switches off the engine. When the driver depresses the clutch again the engine seamlessly starts up, and when a gear is engaged the car can be driven off as usual.

The new Ecomotives are also equipped with SEAT's clever energy recuperation function which recycles energy coming from the alternator when the driver takes his foot off the accelerator or steps on the brake. The engine work is reduced, so fuel consumption decreases.

Modifications to the five-speed gearbox of SEAT’s greenest new models also contribute to improving the fuel consumption figures still further. In addition, all three new cars are fitted with SEAT's handy recommended gear indicator device, located in the instrument binnacle, which displays the most appropriate gear for the driving conditions.

With such a broad offering of green cars now available, SEAT is confident buyers can easily find a model in the new Ecomotive range to suit their precise needs. The new SEAT Leon, for instance, features a distinctly sporty body coupled with extremely low fuel consumption figures and emissions levels, while the new SEAT Altea and SEAT Altea XL offer outstanding driving comfort combined with a spacious, practical yet stylish and sporty look.

The trio of new Ecomotive models are expected to make their debut on UK roads early in 2010, with precise pricing and specification details being confirmed closer to their official on-sale dates.