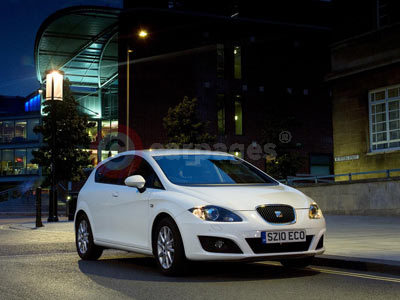 SEAT's latest class leader, the new SEAT Leon Ecomotive, is making its UK debut in front of the nation's motoring press this week and with hundreds of orders already under its belt thanks to SEAT UK's largest single fleet deal to date - 500 new SEAT Leon Ecomotives to British Gas - the omens already look pretty good for the super-frugal new Spaniard.

Showcasing cutting edge engineering, including SEAT's use for the first time of Start/Stop technology and Brake Energy Recovery, the sleek new five-seater underlines the Spanish brand's determination to make itself a leader in the area of environmentally responsible motoring.

It's perhaps no surprise, then, that the latest SEAT Leon sees its CO2 emissions slashed to just 99 g/km (the same as the original Ibiza Ecomotive) while its combined fuel economy figure of 74.3 mpg gives the Leon a range of almost 900 miles between fill-ups.

Among the features key to the car's improved economy and emissions performance, compared with the already frugal outgoing Leon Ecomotive, are its use of a new 1.6-litre TDI engine with the latest common rail technology and DPF (Diesel Particulate Filter), new Start/Stop technology and SEAT's new Brake Energy Recovery system.

Despite a drop in cubic capacity, the SEAT Leon's new EU5-compliant powerplant still offers up 105 PS - exactly the same power output as the previous 1.9-litre turbodiesel - yet thanks to its new technology the car's emissions have plunged from 119 g/km previously to that VED-busting figure of just 99 g/km today.

Sacrificing performance in the quest for out-and-out economy has never been SEAT's way, of course, so it's perhaps no surprise that the new SEAT Leon Ecomotive's 0-62 mph time remains a sprightly 11.5 seconds while the top speed is an entirely ample 118 mph.

Driving the front wheels through a five-speed manual gearbox with ratios precisely attuned to the needs of economical yet involving motoring, the Leon Ecomotive's engine is now even more refined, too.

The SEAT Leon is, however, sharing its place in the spotlight this week with other Ecomotive-badged newcomers as both the new SEAT Altea Ecomotive and SEAT Altea XL Ecomotive make their debuts, too.

Boasting the same powertrain as their slightly less capacious cousin, the SEAT Altea models do without the aerodynamic adjustments that help the Leon to its exceptional stats. As a result their economy and emissions figures can't quite match the SEAT Leon's - although 119 g/km of CO2 from both cars is hardly profligate. Combined fuel economy of 62.8 mpg for both cars is not to be sniffed at, either.

All three cars are available in both S and SE specifications, and all boast a dizzying array of standard equipment to give the lie to the idea that 'economy' and 'luxury' are somehow mutually exclusive.

Prices for the new models start at £16,840 RRP (SEAT Leon Ecomotive S) and, with the Spanish brand's current Eco-nomics offer that drops to as little as £15,090 - subject to availability, terms and conditions apply.