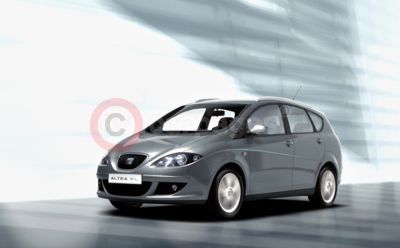 SEAT has released the first details of the Altea XL, a new model that is destined to appeal to families demanding high levels of space and style. Forming part of the Altea family, the new model will be launched in Spain later this year, before arriving in the UK early in 2007.

When SEAT launched the Altea in 2004, it created a car that attracted young (and young-at-heart) customers thanks to a blend of adventurous design, practicality and sporty dynamics. Now, with the Altea XL, SEAT is looking to appeal to those impressed by the Altea’s appearance and sporty image, but who require even more luggage capacity.

This new version of the Altea is XL by name and XL by nature. An increase in length of 18.7 cm results in not only improved boot capacity but also in more space and flexibility in the interior. The new model provides a boot capacity of 532 litres as opposed to the already generous 409 litres offered by the Altea. With the Altea XL’s rear seats moved forwards by 14 cm, boot capacity is increased to 635 litres - more than all of its competitors. And if you plan to throw everything at the Altea XL - including the kitchen sink - then a total luggage capacity of 1,604 litres can be liberated by folding the rear seats down.

The extra spaciousness of the Altea XL can also be appreciated in the back seats, which can be moved back 2 cm further than in the Altea for even more generous leg room. The front seats - just like those in the Altea - are notable for their lofty driving position, for a better viewpoint of the road ahead.

Despite its more practical appeal, the Altea XL keeps the design which is so highly rated by SEAT’s customers: a sporty image and a dynamic look. From the front to the B-pillars, the Altea XL has very similar features to its smaller brother. The rear, however, is all new, featuring striking split tail lights and a design reminiscent of cars from the next class up. In addition, roof bars are fitted as standard.

Safety is one of the most important features for a customer buying a car for the whole family and, as a member of the Altea range, the Altea XL achieves a full 5 stars in Euro NCAP for passenger protection and 3 stars for pedestrian protection. This makes the Altea XL one of the safest cars on the road.

Full specification details and prices of the new Altea XL will be released closer to the model’s launch date.