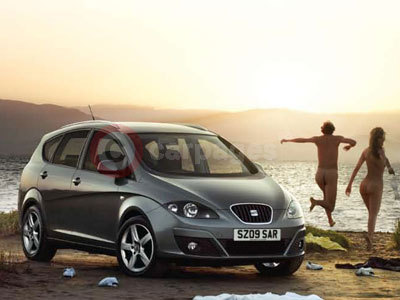 SEAT is out to cause a stir among traditionally conservative family car buyers with an edgy and provocative new advertising campaign which underlines the fact that life doesn't have to stop being fun when you have kids.

The new campaign, which carries the strap line: "The new SEAT Altea, because life shouldn't stop with a family car" is now running in a selection of magazines and newspapers.

It carries an image of a thirty-something couple running naked from their new-look SEAT Altea XL as they prepare to go skinny dipping and bears the slogan "because dirty weekends should be more than watching the kids play football".

The cheeky press campaign is being supported by a new national radio advert in which a youngster and his mum, driving in a SEAT Altea XL, awkwardly discuss mum and dad's forthcoming 'picnic' which is set to include strawberries, cream, and chocolate body paint!

The new adverts, commissioned by SEAT UK National Communications Manager Rob Taylor, are the work of Spanish firm Atletico. The press ads feature professional models, and some of the images were shot at 04:30 in the Ebro Delta near Barcelona - one of the few Spanish beaches not crowded in June!

Even the discarded clothing was carefully researched for the shoot - with the longest discussion among the 20-strong production team involving the bra which it was felt needed to be neither too sexy, nor too 'comfortable'.

The models, Maria Maquilon and Timothy Cordukes, were picked for their 'Britishness' - and their willingness to pose naked.

Rob Taylor explained: "We really wanted the campaign to carry some of the 'SEATTITUDE' that we believe runs right through our sporty Spanish brand. Opting for a slightly risque style does just that, and shows SEAT drivers really have a lust for life!"

The early success of the British campaign by SEAT UK has led Spanish parent SEAT S. A. to supply the adverts to its operations in other European markets.