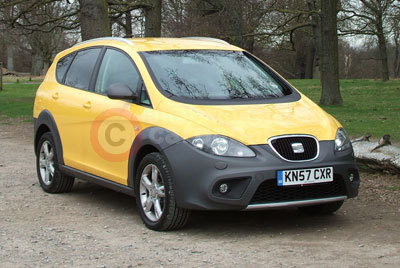 The Altea Freetrack 4 is a curious animal; it combines traditional family transportation, off-road capability and typical SEAT sportiness, all in one package.

Based on the Freetrack concept car shown at the 2007, Geneva Motor Show, the production version uses the SEAT Altea XL as a starting point. However, it is easily distinguished from the donor car by the charcoal grey, plastic guards that make up the front and rear bumpers, chunky wheelarches and, to a lesser extent, the sills.

The design is sneakily sleek in parts and blatantly rugged in others but it is pure SEAT and bears the distinctive swage lines that are now a familiar characteristic of the Company’s vehicles. The Freetrack 4 comes from the sketchpad of SEAT’s Design Director, one Luc Donckerwolke, a name you probably won’t recognise but the fact that he joined SEAT from Lamborghini is evidence of his credentials.

Strangely, although the Freetrack 4 was launched in October 2007, you don’t see many on the road. In fact, I can’t remember seeing one at all. Of the eight colours available, including five metallic's, the Crono yellow paintwork (as on the test car) makes the vehicle stand out from the crowd and you would spot it easily.

As an example of its scarcity; whilst travelling along a motorway during the test, I was aware that I was being trailed by a standard Altea and when it drew alongside I could see that the Freetrack was being photographed by the passenger of the other car - clearly a SEAT fan.

The protective cladding isn’t merely for show. The Freetrack 4 has a Haldex four-wheel-drive system, which under normal circumstances, is purely front-wheel-drive. Should the various sensors detect a change in grip, it will transfer up to 50 per cent of the available power to the rear axle, as required. One of the benefits of an on-demand system such as the Haldex is that it isn’t as heavy as a full-time 4WD system. However, it does take up more space than a standard drive and SEAT had to adapt the rear axle and suspension to accommodate the extra mass.

The Freetrack 4 has 40mm more ground clearance than the XL, to allow for off-roading adventures. Although it is by no means, able to take on the ‘big boys’ of the 4x4 world, it is very capable. That said, the front and rear scuff-plates could well see some action, if you try to tackle very deep ruts, as the approach angle is only 17.6 degrees and the departure angle is almost 23 degrees. The twin tailpipes are positioned quite low down and, despite the rear scuff-plate, they are relatively unprotected. Nevertheless, farm tracks and green lanes shouldn’t be a problem.

SEAT Altea Freetrack 4 Images may not be UK specification cars. Colours and exterior and/or interior elements may differ from actual models.