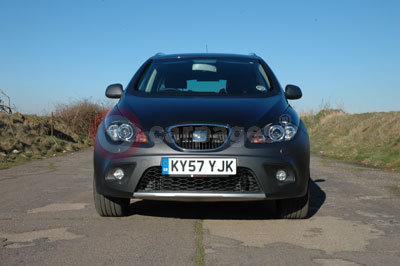 Released on the 20th October 2007 the SEAT Altea Freetrack 4 is billed as a crossover vehicle. Based on the SEAT Altea XL it is essentially three cars in one: it has off-road capability, the practicality and space of a large family estate, plus the handling and performance of a hot hatch.

Inspired by the Freetrack concept car shown at the 2007 Geneva Motor Show, the new four-wheel drive vehicle is the work of SEAT’s Design Director Luc Donckerwolke, who joined the brand from Lamborghini in 2005.

There is a choice of two engines a 200 PS (197 bhp) TSI petrol and 170 PS (168 bhp) TDI diesel and both are equipped with 6-speed manual gearboxes. The petrol engine is the same one found in the Leon and Altea FR models and is capable of propelling the Altea Freetrack 4 from 0 to 62 mph in 7.5 seconds and on to a top speed of 133 mph. The quoted combined fuel economy figure is 30.1 mpg.

We chose to drive the diesel powered Freetrack 4, which is priced at £500 more than the petrol model. It could hardly be called slow with a 0-62 mph time of just 8.7 seconds and a top speed of 127 mph and it returns a relatively frugal combined fuel economy figure of 41.5 mpg.

Although the diesel engine is a little bit gruff it performs very well, there is a bit of lag from the turbo but it delivers a reasonable 258lb-ft of torque from quite low down at 1800 rpm.  Over our test week with the SEAT Freetrack 4 we managed to return 35.4 mpg, which we did not consider too bad as that included quite a bit of town driving and crawling around country lanes, on the motorway this increased to 43.4 mpg.

On the road the Altea Freetrack 4 handles very well, even with a high ride height of 40 mm over the Altea XL. Few other MPV’s could out pace the Freetrack 4 through the bends, it can be quite a joy to drive even on demanding ‘B’ roads and even though it isn't a hot hatch it remains surprisingly composed.

SEAT Altea Freetrack 4 Images may not be UK specification cars. Colours and exterior and/or interior elements may differ from actual models.