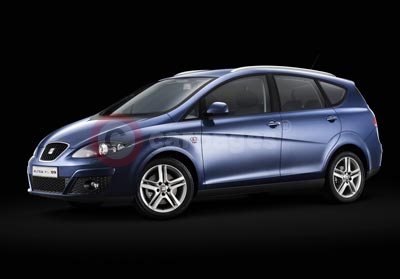 The first SEAT Altea photos have been unveiled in preperation for the Geneva Motor Show.

With the Geneva Motor Show looming, the first official pictures of the SEAT Altea have been unveiled.

The design of the five seat MPV is calculated to increase the SEAT Altea's appeal, having received extensive engineering and equipment improvements as well as a fresh visual upgrade.

SEAT's trademark Arrow Design, first seen on the new Ibiza, makes its debut on the SEAT Altea model making the car instantly recognisable on the road.

At the rear, the glass area has been increased to improve visibility, while the light clusters and rear hatch have also been modified.

Inside, modifications have been made to the instrument panel and centre console as well as changes to the door panel trim and materials. The results is a modern, more ergonomically efficient passenger compartment.

The SEAT Altea now offers ten engine choices, five petrol and five diesel, all of which have undergone an engineering evolution focused firmly on improving performance as well as reducing fuel consumption and emissions.

A powerful 211 PS 2.0 litre TSI engine heads up the petrol engine range, while the most important innovation among the diesels is the arrival of common rail technology to the 170 PS 2.0-litre TDI. All versions of the SEAT Altea come equipped with SEAT's DSG automatic sequential manual gearbox, featuring shift paddles on the steering wheel.

Safety is, of course, a key consideration in the 2009 SEAT Altea line-ups, with a comprehensive selection of active safety measures on offer. Among the electronics racing to the SEAT driver's aid when things get sticky are ABS + TCS and ESP with EBA emergency braking.

UK pricing and full specification details for SEAT's revised Altea line-ups will be released closer to the models' showroom debut here this summer.