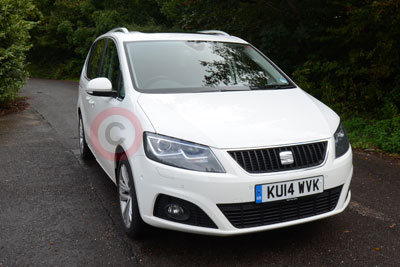 The SEAT Alhambra was introduced in 2010 and was developed alongside its sibling the Volkswagen Sharan; both are built at the Palmela plant in Portugal.

We will let you into a secret the Alhambra is cheaper and better specified than the Sharan.

It is a full sized MPV capable of carrying seven adults in reasonable comfort in a market now dominated by SUVs. Prices start at £25,630 for the entry level ‘S’ model and rise to £30,900 for the top-of-the range ‘SE Lux’.

There is a choice of two output 2.0-litre diesel engines, 140PS and 177PS - both which are available with the choice of either a six-speed manual or DSG-automatic transmissions.

We drove the SE Lux 2.0 TDI CR 177 PS with the six-speed manual transmission, which is capable of 0-62 mph in 9.3 seconds and a top speed of 129 mph, the lower output model loses about 10 mph off the top speed and add 1.6 seconds to the acceleration time.

On paper the 2.0 TDI CR 177 PS manual is capable of 37.7 urban mpg, 54.3 extra urban and a combined figure of 47.1 mpg (all NEDC figures) - we were achieving up to 42 mpg on the motorway and mid-thirties when touring. The official figures do vary between the manual and DSG transmissions, and the 140PS / 177PS models, but in the real world there probably would not be much in it.� CO2 emissions are recorded at 158 g/km for the 177 PS manual.

This is a 6-year+ news article, from our SEAT archive, which dates back to the year 2000.

If in doubt check with your local SEAT dealer as car prices and technical data will have changed since 2014.