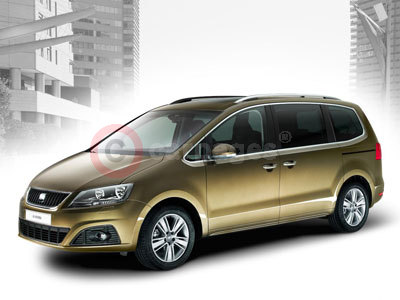 The All New SEAT Alhambra

This is all-new SEAT Alhambra, measuring 4.85 metres bumper to bumper the new Alhambra is 22 centimetres longer than its predecessor, while it is also wider by a full nine centimetres.  There’s plenty of room for adults to sit comfortably, even in the third row, while the large sliding doors (with optional electric operation) allow especially easy entry.

Luggage space has been increased as well.  When configured as a five-seater the new SEAT has 885 litres of load space available, which grows to a cavernous maximum of 2,297 litres if only the front two seats are in use.

Central to the new car’s development has been the intelligent and extremely versatile seating concept – the new Alhambra comes with seating for five, six or seven.  Unlike its predecessor if more storage room is called for the second and third-row seats need no longer be removed; instead, they can be sunk easily into the vehicle floor using the “Easy-Fold” system.

The middle row seats can also be arranged longitudinally, with integrated child seats available as an option.  Meanwhile the seating position of both the driver and front seat passenger combines the best visibility with a sporty feel and ideal ergonomics.

Beneath the skin, the Alhambra is new in every detail and equipped with state-of-the-art technology throughout.  First and foremost there’s the new engine line-up, where the TSI and both TDI power units are equipped with direct fuel injection and turbocharging.  The TSI unit delivers 150 PS, while the two TDI engines offer 140 PS and 170 PS.  Further efficiency measures fitted as standard include a Start-Stop system and brake energy recovery technology.  These guarantee refined pulling power alongside exceptional economy.

With an average fuel consumption of more than 51 mpg and CO2 emissions of just 143 g/km, the 140 PS SEAT Alhambra 2.0 TDI sets a clear benchmark in its class.  The Alhambra TDI is also equipped with an SCR catalytic converter (Selective Catalytic Reduction), making the diesel model one of the world’s cleanest MPVs.

Just like the TSI and TDI engines, the optional DSG dual-clutch transmission delivers a perfect combination of sporting character, comfort and efficiency.  But it’s the range of state-of-the-art and innovative technologies offered as optional equipment on the new Alhambra that really stand out.  Among the highlights are the SEAT’s bi-xenon headlamps with adaptive control and new full beam assistant.  In this system, a sensor detects oncoming vehicles and automatically dips the beam.

Also new is the park/steer assistant, which autonomously manoeuvres the Alhambra into tight parking spaces.  A rear view camera delivers an image of the world behind the vehicle while the optional panorama sliding roof has an opening that is 300% larger than a conventional sunroof.  The new car’s optional three-zone Climatronic ensures an optimum temperature in all seats while electric motors simplify the operation of the sliding doors and rear hatch.

Standard safety equipment is already well above the industry average.  In the new Alhambra it encompasses seven airbags, including a driver-side knee airbag, and electric child locks on the rear doors.  Also standard are ABS and ESP, including electronic braking assistant, trailer stabilisation and tyre pressure monitoring display.

Once again produced in Palmela, Portugal, the new Alhambra goes on sale in its home market this summer.  More details of the UK range, including specification and pricing details, will be available closer to the car’s launch here later this year.