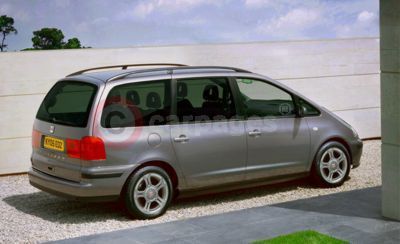 Sophisticated new diesel engines have been added to SEAT’s Alhambra and Ibiza models, producing more power and cleaner emissions than the powerplants they replace. At the same time, the seven-seat Alhambra has benefited from enhancements that further increase the appeal of this full-sized sporty MPV.

Typically of SEAT’s powerful diesel models, the new Alhambra 2.0 TDI is able to deliver both punchy performance and frugal economy. It will sprint from rest to 62 mph in 12.2 seconds before reaching a top speed of 119 mph (where permitted), and yet returns 41.5 mpg on the official combined cycle.

The ‘Alhambra’ badging has now been repositioned across the centre of the tailgate, following the distinctive look seen on the Altea, Toledo and new Leon. New paintwork options have also been added. Inside, a new fixing mechanism has been added to the rear seats, which allows them to be even more securely locked into the upright position if required. In addition, curtain airbags are now fitted as standard across the range, making a total of six airbags, along with ESP (Electronic Stabilisation Programme) on manual transmission models.

Prices are unchanged, with the range starting at £16,220 RRP for the 2.0 115 PS Reference, going up to £21,570 RRP for the 1.9 TDI Stylance with Tiptronic automatic transmission. The new 2.0 TDI 140 PS Stylance costs the same as its predecessor, at £21,120 RRP. All Alhambras are well specified, with standard equipment including a CD player, climate control, six-speed manual gearbox (except Tiptronic version), remote central locking, electric mirrors and four electric windows.

The dynamically styled Ibiza - voted What Car? magazine’s Car of the Year 2003 as well as its Supermini of the Year for the past three years - has also received a new diesel engine. A revised Euro 4 three-cylinder 1.4-litre TDI 80 PS replaces the 75 PS Euro 3 engine of the same size. Thanks to the slight boost in power output, performance is improved with a 0 to 62 mph time of 12.9 seconds (down 1 second) and a maximum speed of 109 mph (up 2 mph). Fuel consumption remains the same, with an impressive combined cycle figure of 61.4 mpg and low CO2 emissions of 124 g/km.

The Ibiza is SEAT’s most popular UK model, with prices kicking off at £7,550 (RRP on the road). Engine options are extensive, ranging from a frugal 1.2-litre three-cylinder 64 PS petrol, to the muscular 1.9-litre TDI 160 PS diesel and 1.8-litre 20V T 180 PS petrol, which power the range-topping Cupra models.

12 year body warranty and 2 year SEAT Service Mobility valid in over 30 countries in Europe and its borders.