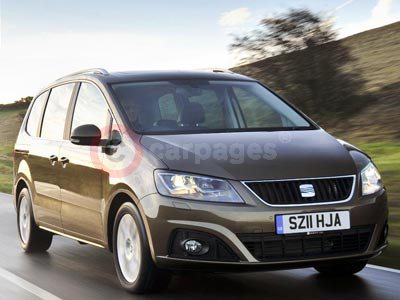 The new SEAT Alhambra MPV - the Spanish brand's seven-seat people carrier - is the proud recipient of yet another prestigious trophy, this time in the inaugural CarBuyer awards.

The luxurious, practical new SEAT - launched here at the end of 2010 to universal acclaim - has been named 'Best Large MPV' in the first annual CarBuyer awards.

And the latest trophy joins a growing collection of important award wins for the SEAT Alhambra as expert motoring journalists, and satisfied SEAT owners across Europe, continue to vote it top of its class.

In just a few short months the seven-seat SEAT has picked up multiple trophies in Portugal, Germany and here in the UK, where earlier this year What Car? named it their MPV of the year.

Explaining the most recent win CarBuyer Editor Dan Strong said: "With a clever seven-seat interior and a large boot, the SEAT Alhambra is all the MPV you'll ever need!

"As our careful deliberations revealed, the car is spacious and practical inside, and thanks to a range of Volkswagen-sourced engines it's incredibly fuel-efficient. All diesel engines are equipped with Stop/Start systems, which cut the engine when the vehicle is stationary to save fuel.

"Don't miss the excellent petrol powered 1.4-litre TSI version, either. It combines its small size with a turbocharger and a supercharger to deliver impressive performance and economy."

Available in S, SE or top spec' SE Lux trim and priced from just £22,800 RRP, the award-winning SEAT Alhambra is offered with a choice of modern turbocharged petrol or diesel powerplants. All engines can be paired with either a crisp six-speed manual or smooth six-speed DSG auto which offers the extra flexibility of sequential manual operation via the standard steering wheel-mounted paddle shifts.

Move up to SE and you can look forward to such luxuries as auto lights and wipers, auto-dimming rear view mirror; 17-inch alloys; High Beam Assist and cruise control among a raft of added equipment.

Mr Wyhinny said: "The astonishing success of the new Alhambra clearly underlines SEAT's ongoing commitment to excellence. This prestigious award from CarBuyer is the latest in an impressive line-up of trophies for our car and I'm very happy that it obviously struck such a chord with the judges."