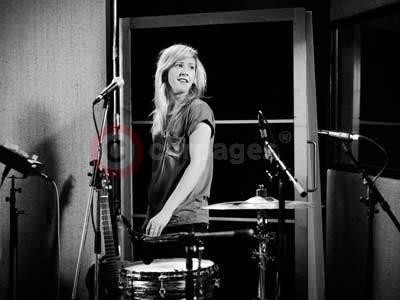 Ellie Goulding in On Track With SEAT

With Universal Music, SEAT UK has been awarded the Music and Brand Partnership of the Year award at the Music Week Awards for On Track with SEAT, the manufacturer's first involvement with a music-based marketing association.

Commenting on the success of the On Track programmes, the Music Week judges said "In a very strong shortlist, Universal and SEAT emerged as the partnership that best demonstrated the potential for mutual interest between music and brand."

Head of Marketing at SEAT UK, Steve Robertson collected the trophy at an awards event at London's Roundhouse performing arts venue in Camden.

On Track with SEAT saw 12 established and up-and-coming artists visit the Metropolis Studios in London to record live sessions to vinyl in 'one take' performances, filmed and broadcast on Channel 4.

Artists included Ellie Goulding, Amy Macdonald, The Coral and Tinchy Stryder, each recording a number of their own songs, plus a particular cover version that had inspired them.

Twelve fifteen minute episodes were watched by over three million and resulted in tens of thousands free music downloads from the Club SEAT website.

Steve Robertson said: "In SEAT we're passionate not just about our cars but about the way that we bring our brand to life. I think On Track with SEAT and our partnership with Universal Music really reflected that passion.

"Music is one of the two main sponsorship pillars within SEAT - the other being our football associations with both the UEFA Europa League and, in the UK, Fulham FC and the popular SEAT FIVES amateur football tournament.

"So when we were drawing up the On Track concept we knew we wanted to produce something that not only reflected our dynamic, design-driven and young-spirited brand values but also had the integrity to appeal to the audience and artists alike."

He added: "I know that the challenge to the artists of laying down live tracks to vinyl was something they loved, and this really came across in the shows and recordings.

"Plus, through Club SEAT, we were even able to get some of the biggest fans down to Metropolis Studios to watch the artists performing for the show!"