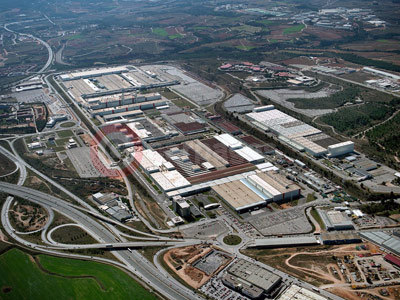 SEAT is bringing some much-needed good news to the Spanish economy with the announcement of 700 new jobs at its Martorell plant near Barcelona.

SEAT and the Catalan government's Department of Business and Employment have signed an agreement to train new workers to build the forthcoming Audi Q3 at Martorell. The agreement will see 1,200 people receive training, leading to the creation of at least 700 new jobs. The workers will be gradually incorporated into the company, beginning this Spring.

SEAT is also considering the possibility of hiring more of the trainees who successfully complete the training programme, depending on the company's future production requirements.

The training and employment agreement was signed by F. Xavier Mena - the Catalan government's Minister for Business and Employment - and Josef Schelschshorn, SEAT's Vice-president for Human Resources, at the company's Training Centre in Zona Franca, Barcelona.

The event was also attended by Esther Sanchez - Secretary of Employment and Labour Relations - and Ramon Paredes, Executive Vice-president for Governmental and Institutional Relations for SEAT and the Volkswagen Group in Spain.

Mr Schelchshorn explained that the Audi Q3 project guarantees 1,500 jobs at SEAT, with 700 of those being new posts. He also highlighted the opportunity the announcement offers for young people in the region, saying: "We offer the chance to get further qualifications as well as the prospect of working for SEAT, one of the most important and attractive job creators in the country, on the basis of a long-term contract."

Minister Mena thanked SEAT and the Volkswagen Group for their ongoing commitment to Catalonia, demonstrated most recently with the decision to produce the Audi Q3 at Martorell.

The training agreement falls within the Forma i Contracta ('Train and Hire') programme run by the Catalan Employment Service (SOC). The programme covers 100% of the cost of training in exchange for a commitment to offer at least 60% of those trainees who successfully complete the course a contract of not less than six months' duration.

SEAT remains the only company in its sector with the capacity to fully design, develop, manufacture and market cars in Spain. A member of the Volkswagen Group, the multinational has its headquarters in Martorell near Barcelona, and exports around 75% of its production to 72 countries. SEAT is the market leader in Spain and in 2010 had a turnover of around five billion euros, with total sales of 339,500 vehicles worldwide.