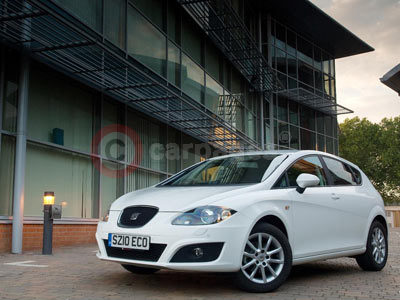 Any colour you like, so long as it's green - that's SEAT's unequivocal message at the launch of the International Eco Friendly Vehicle and Sustainable Mobility Show in Madrid.

The Spanish brand is using the green-themed event to unveil the third generation of the SEAT Ibiza Ecomotive, which boasts a new 1.2-litre TDI powerplant with the latest common rail fuelling, Diesel Particulate Filter and an array of economy-minded technologies.

Together, these major engineering changes help this left-hand drive version of SEAT's supermini to an exceptional CO2 figure of just 89 g/km - a joint best-in-class number that makes the SEAT one of the cleanest conventional engined cars on the planet.

Naturally, fuel consumption is just as impressive. The SEAT Ibiza Ecomotive's combined figure of 83.1 miles per gallon makes it, similarly, one of the most economical diesel-engined superminis on the market.

Aside from that new engine the technical revisions key to the newcomer's improved economy and emissions stats include the use, for the first time in a SEAT Ibiza, of SEAT's Auto Start/Stop function allied to the Spanish firm's Energy Recovery System, which both work to minimise waste.

The arrival of the new SEAT Ibiza Ecomotive confirms SEAT's leadership in the field of green car development and it joins a similarly impressive Ecomotive line-up which now includes the SEAT Leon (99 g/km), the SEAT Altea and SEAT Altea XL (119 g/km) and the SEAT Alhambra(159 g/km).

Also on display in Madrid is the SEAT IBE Concept, which made its global debut earlier this year at the Geneva Motor Show. The SEAT IBE Concept is a fully electric, plug-in compact sporty coupe which illustrates SEAT's commitment to both design sophistication and driving pleasure. Running on what the Spanish brand describes as the ecological drivetrain of the future it offers a sporty, dynamic urban mobility concept and an exciting look at the evolution of SEAT design.

The green-themed Madrid show stand would not be complete without the SEAT Leon Twin Drive Ecomotive, a plug-in hybrid model that features both a conventional combustion engine and an electric motor. Its lithium ion battery is charged at the mains, giving it a 50 kilometre range in full electric mode. Longer trips require additional support from the combustion engine.

Mass production of the SEAT Leon Twin Drive Ecomotive is scheduled for 2014 but, by the beginning of 2011, as many as ten cars will be making their road debut on the streets of Madrid, Barcelona and Seville in an extensive test of electric car technology and infrastructure in Spain.

SEAT's deep-rooted commitment to reducing the environmental impact of its vehicles could not be clearer. In its home market, the Spanish company tops the best-seller list of models that register under 120 g/km, with the Ibiza being the undisputed segment leader.

In fact models with emissions of less than 120 g/km make up no less than 60% of SEAT's domestic sales. This figure rises to 71.2% and 62.3% respectively for the SEAT Ibiza and the SEAT Leon. And with the arrival of Ecomotive versions of the new SEAT Altea and SEAT Altea XL, plus the debut of new generation common rail diesel engines throughout its line-up, SEAT is further increasing its selection of sub-120 g/km vehicles.

The International Eco Friendly Vehicle and Sustainable Mobility Show runs until Sunday 23rd May 2010 in Halls 3 and 5 at the Feria de Madrid Convention Centre.