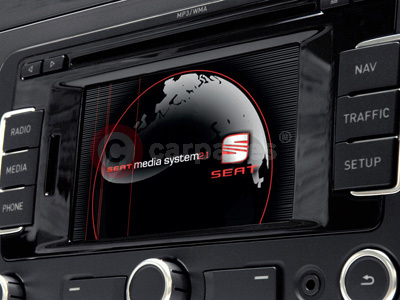 The cutting edge SEAT Media System 2.1 is being offered as an option on most versions of the popular family cars as the Spanish brand continues to capitalise on its position as an innovator in automotive technology and in-car entertainment.

The addition of a DAB (Digital Audio Broadcasting) receiver means SEAT buyers will be able to pick up a massive range of stations including a whole array of digital-only stations, such as BBC 7 and 6 Music, which were previously unavailable to them.

The new Media System doesn't stop there, though. Also included is a host of exciting new features designed to make the driver's entertainment and communication options both broader, and more flexible.

Among the new features is Bluetooth audio streaming which allows wireless streaming of music direct from a smart-phone or Bluetooth-enabled MP3 player. And, now, the Media System's touch screen can be used to control a compatible, Bluetooth-linked mobile phone - offering the driver both a large numeric keypad as well as access to call lists, phone books and so on.

What's more, the satnav system now comes with pre-installed maps of Western Europe - not just the UK and Ireland. Not only does this mean Continental trips become that much simpler but, also, because the data is stored on the system's hard drive it leaves the CD player available for more music, rather than a CD or DVD navigation disc.

Finally, map data is now accessed more quickly than previously because it is stored in the system itself, rather than on a disc.

Welcoming the upgrade SEAT UK Product Manager James Buckell said: "The recent passing of the Digital Economy Bill, which allows for the migration of analogue radio to digital services from 2015, means today's buyers should start to 'future-proof' their cars.

"The option of adding a state-of-the-art DAB system to new Leon, Altea and Altea XL models - plus all the other great new features and functionality which come with the SEAT Media System 2.1 - only serve to make the models that much more appealing."