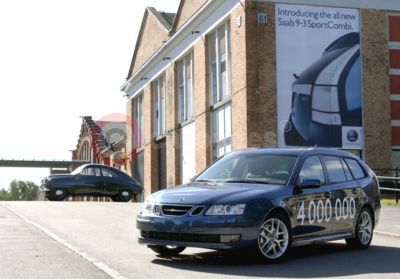 Saab reached a milestone this week when its fourth millionth car came off Trollhättan’s assembly lines in Sweden. The model in question was a just-launched Saab 9-3 SportWagon.

On 21 June, at 14.35 hours CET, a 9-3 SportWagon 2.0t in fusion blue - one of the first examples of this newly-announced model - rolled off the production line at Saab's Trollhättan plant in Sweden and was taken straight to the Saab Museum, where it will go on display among a pantheon of historic Saab exhibits.

Saab's four million milestone has been reached 55 years and six months after the Svenska Aeroplan Aktiebolaget (Swedish Aircraft Company Limited), commonly known as 'Saab', produced its first car at the same Trollhättan plant, which was formerly used to build aircraft. That car was the aircraft-inspired, teardrop-shaped 92 model, the beginning of the company's diversification into the automotive business.

As the brand moves further into the premium segment, Saab production milestones are being reached with increasing regularity. The millionth car - a Saab 99 Combi Coupé - was rolled out in January 1976, the two millionth - a Saab 9000 Turbo - in March 1987 and the three millionth - a Saab 9-5 Saloon - in October 1997. Now the four million mark has been reached less than eight years later, proving that Saab’s unmistakable brand values of aircraft heritage and Swedish design are more popular than ever with drivers all around the world.

Since Saab sales began in the UK in late 1960, the British market has accounted for over 10 per cent to Saab’s global sales, with over 407,000 cars being sold here to date. Saab is currently the UK’s fastest growing premium car brand, with sales this year set to break a record 25,000 cars.