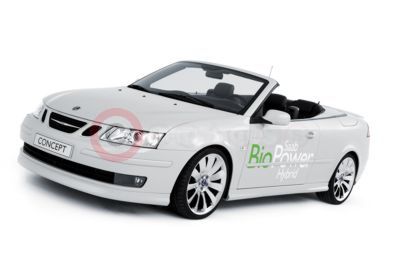 Hoping to turn the British International Motor Show green with envy when it opens in July, Saab Great Britain is proud to have on show no less than three different environmentally-friendly models. All have the potential to deliver substantially reduced - or even zero - fossil CO2 emissions, due to their ability to run on one of the most talked about new transport fuels of the moment - bioethanol.

Having made its world premiere at the Stockholm Motor Show earlier in 2006, this is the first time that the ground-breaking Saab 9-3 Convertible BioPower Hybrid Concept has been seen outside of Sweden. Delivering zero fossil carbon dioxide (CO2) emissions, enhanced performance and a range of energy-saving features, the Saab BioPower Hybrid Concept is the first ever car to combine the use of pure bioethanol fuel and electric power generation. As the world's first fossil-free hybrid vehicle, the Saab 9-3 Convertible show car also becomes the world's first hybrid soft-top.

Bioethanol is a potent yet eco-friendly alternative to petrol, which is produced from a variety of agricultural sources. Unlike petrol, its consumption does not significantly raise atmospheric levels of carbon dioxide, which some scientific research suggests is a major contributor to global warming. This is because emissions during driving are balanced by the amount of CO2 that is removed from the atmosphere when crops for conversion are grown.

The BioPower Hybrid Concept prototype car, a 9-3 Convertible with automatic transmission, is expected to achieve zero to 62 mph acceleration in just 6.9 seconds, a substantial improvement against 8.8 seconds for the equivalent petrol model.

Saab is delighted to announce that London will host the world premiere of the 210 bhp 2.3t BioPower engine in the new-look Saab 9-5 range.

The high-performance 2.3 turbocharged flex-fuel engine has the possibility of cutting fossil CO2 emissions by between 50 and 70 per cent compared to the equivalent petrol engine, due to its ability to run on the potent yet eco-friendly fuel, bioethanol E85, which is a blend of 85 per cent bioethanol and 15 per cent petrol. However, when running on bioethanol E85, the new Saab 9-5 2.3t BioPower engine delivers 210 bhp and 310 Nm of torque, compared to 185 bhp and 280 Nm when using unleaded petrol, which is an impressive 14 per cent increase in maximum power and 11 per cent more torque.

The 9-5 2.3t BioPower will go on sale in the UK and other selected European markets later this year.

The award-winning Aero X Concept Car makes its London debut, after being unveiled to global acclaim at the 2006 Geneva Motor Show in March. A two-seater sports coupé which runs on pure 100 per cent bioethanol fuel, this car harnesses the power of Saab's aviation and Scandinavian roots to make a unique statement in performance car design, breaking with automotive design convention both outside and in.

First, there are no doors - or windscreen pillars. That's because the Saab Aero X adopts a cockpit canopy, just as you would see on a Saab jet aircraft. It offers the Aero X pilot full 180 degree vision, and also facilitates entry and exit from its low-slung cabin.

Thrust for the all-wheel drive Saab Aero X comes from a powerplant with a difference. The 400 bhp twin-turbo BioPower V6 engine is fuelled by pure bioethanol, giving new meaning to the phrase 'performance with responsibility'. Offering the prospect of zero fossil-based CO2 emissions, the Aero X’s advanced 2.8 V6 BioPower engine delivers 400 bhp maximum power at 5,000 rpm and massive torque of 500 Nm between 2,000 and 5,000 rpm. Computer simulations anticipate zero to 62 mph acceleration in just 4.9 seconds and a limited top speed of 155 mph (250 km/h).

Since the launch of Saab BioPower flex-fuel technology one year ago in its domestic market of Sweden, the 9-5 2.0t BioPower has flown to the top of the country’s environmentally-friendly sales charts, with over 10,000 9-5 BioPowers expected to be sold in Sweden in 2006. The advent of bioethanol E85 as a new, clean road transport fuel is also now being seen in many other European countries and is regarded as one of the most exciting and high-potential, near-term alternatives to the traditional petrol combustion engine.

Bioethanol E85 is also the fuel of choice in Brazil, where some 70 per cent of new cars are flex-fuel powered, whilst the US is also fast waking up to the benefits of plant power.

Commenting on Saab’s line-up at the upcoming British International motor show, Jonathan Nash, Managing Director of Saab Great Britain, remarks: "With three very different interpretations of BioPower technology coming to London, Saab shows just how exciting alternative fuels can be. The fact is that not only are these cars substantially cleaner than their petrol equivalents, they all offer a sportier driving experience when running on bioethanol, and are all perfect examples of Saab’s unmistakable Swedish design ethic."