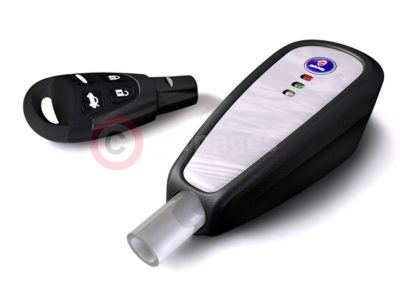 As the UK Government launches its Road Safety Bill 2005, which includes research into Alcohol Ignition Interlock Programmes (AIIPs), Saab Automobile - traditionally one step ahead of the game - is currently striding ahead with the technology in its domestic market of Sweden.

The UK Government's Department for Transport (DfT) has just released details of its Road Safety Bill 2005, which allows for the future use of Alcohol Ignition Interlock Programmes (AIIPs). The DfT notes that previous research and experience from around the world 'have shown that these are effective in discouraging re-offending [of drink driving]'.

Saab Automobile AB is now taking the next step in the development of the intelligent Alcokey it introduced in concept form in autumn 2004. Financed in part by grants from the National Swedish Road Administration's sign fund, Saab is commencing wide-ranging field trials involving both private customers and trucking firms, with a view to launching the finished device on the Swedish market as an optional extra within two years. The technology could then become available in the UK.

A perfect example of the type of Swedish design that categorises the Saab brand, Saab's Alcokey is avant-garde in its existence yet simple in its functionality. Users of the Alcokey must breathe into a small mouthpiece in the car's key fob, which is fitted with a breathalyser. A transponder communicates with the car's electronic control unit, immobilising the engine if a driver's breath sample is found to contain alcohol above the permitted level.

"An important factor is the acceptance of the Alcokey among private customers," says Saab Automobile's Managing Director Jan Ake Jonsson, who has also tested the technology. "The great majority of them would never dream of driving while under the influence, and yet we know that alcohol is involved in nearly a third of all fatalities among drivers - on our Swedish roads just as elsewhere. If we can deal with that problem we'll be making a decisive contribution towards road safety."

Saab first exhibited its concept for an Alcokey in autumn 2004. Because the Alcokey obviates extra electronics and elaborate installations, Saab believes that once it is in serial production it will be possible to keep the price to the customer below £225 (3,000 SEK). Saab also hopes that the Alcokey can be fitted post-delivery to most Saab models.

The field trials that are currently being undertaken are concerned with studying factors such as accuracy of readings, long-term properties and robustness. Another important aspect is how the trial participants perceive the Alcokey in daily use. It's been known for some time that customers are less inclined to pay for features that they don't consider they need - "I never drive when I've been drinking" - which makes ease of use all the more important.

Anna Petre, responsible for community contacts at Saab Automobile, says: "In order to stimulate the introduction of the Alcokey on a broad front, consideration should be given to government involvement in the form of reduced fiscal-benefit values, or arrangements with the insurance companies to lower premiums on cars fitted with Alcokeys.

"Saab's Alcokey", says Anna Petre "is primarily intended as a support for those who want to stay on the right side of the law. During its development, one priority has been to achieve user-friendliness, and this is a breathalyser that will still pick up the great majority of drunk-driving cases. It's going to take time, of course, before all cars have Alcokeys, but we have to start the process somewhere."