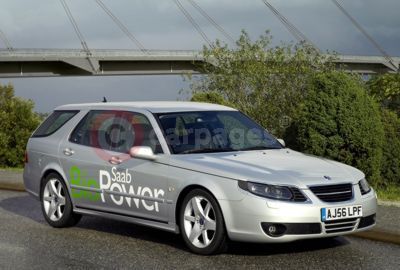 The title says BioPower and indeed BioPower was written in large letters on the sides of the 9-5 estate that was delivered but, as my nearest E85 fuel pump is some sixty miles away, the car arrived filled with ordinary unleaded fuel.

And that proves two things - that the car runs just as well using both forms of energy, although there are differences in performance, and the other is that the E85 re-fuelling structure needs to be in place before people will make the switch to eco-friendly fuels.

It was very different when LPG powered vehicles made an impact on the buying public and LPG pumps were opening at the rate of twenty per week. Sainsbury’s supermarkets were the most notable champions at the time and in a similar fashion, Morrisons have taken up the mantle by opening E85 pumps at their service stations. At the time of writing, there are five outlets in Somerset, three in Norfolk and two in Suffolk.

Bio fuel or bioethanol, to give it its correct title, has been around for a while. It is made from crops such as corn, grain, sugar beet and sugar cane. In Brazil, it is sold in its purest form as E100, which means it isn’t mixed with petrol. But in Sweden, the blend is 85:15 bioethanol and petrol, respectively - hence the name, E85. The environmentally friendly part comes into play when it is fuelling a vehicle as E85 doesn’t increase the level of CO2 during use. It isn’t emission-free but as the crops remove CO2 from the atmosphere during growth it balances out. However, it does require a good many acres of crops to produce a reasonable and viable amount of fuel.

It takes 9.8 seconds for the petrol to do the 0-62mph sprint while with E85 the car completes the dash in 8.5 seconds and has a top speed of 135mph, which is 5mph faster than with petrol in the tank. These differences are not quite so marked in the larger 2.3t BioPower.

The capability in running both fuels is down to the Saab Trionic 7, engine management system, which monitors and adjusts the timing and fuel/air mixture, depending on the fuel used. This is important because the actual mix in the tank will vary depending on how much was left in there before re-filling with the alternative.

The only other difference is that the valve and valve seats are made of a more durable material than normal and the fuel storage and delivery system components are bioethanol-friendly.

This is a 14-year+ news article, from our Saab archive, which dates back to the year 2000.