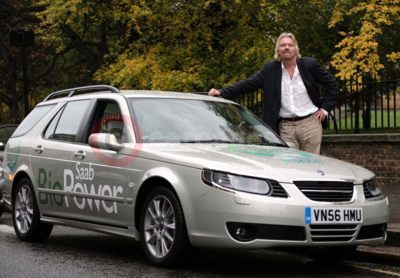 Move over fossil fuel - that's just so passé - or that's the message as the UK's most high-profile and best-known businessman Sir Richard Branson takes delivery of a Saab 9-5 BioPower!

Sir Richard's switch to his Saab flex-fuel car, which runs on the eco-friendly and renewable fuel source bioethanol E85 (made from plant products such as wheat and grain), reinforces the Virgin boss's unwavering commitment to fighting one of the biggest challenges of our times - that of global warming.

Speaking today (Wednesday 15th November) as he took the keys of his new Saab, Sir Richard said: "I am convinced that biofuels are the way forward, both for the car and aviation industries, which is a vision we share with Saab. Now we need to extend that vision to others.  It's high-time that flex-fuel cars, such as the Saab 9-5 BioPower, are given the same concessions in the UK as other green cars, like for example, exemption from London's Congestion Charge."

He continued: "At the moment, bioethanol is made from a variety of agricultural sources, whilst in the future, we will see it made from cellulosic waste matter, such as wood chippings, which really will make it the ultimate green fuel."

Earlier this year, the Virgin Group announced that all profits and equity realisations over the next 10 years from the group's worldwide transport companies, including Virgin Atlantic and Virgin Trains in the UK, would be invested in the renewable energy sector.  The amount to be invested is expected to be some £1.6bn.  Virgin Fuels is expected to be one of the beneficiaries and has already invested in bioethanol production and will conduct research and development into alternative transport fuels, including bioethanol and an alternative biofuel for aviation.  Sir Richard's new car will carry both the Virgin Fuels and Saab BioPower logos.