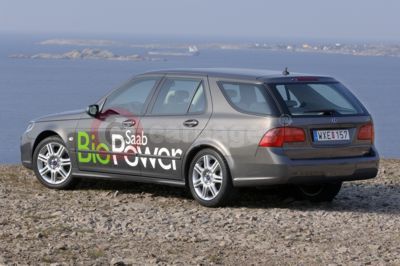 Following the overwhelmingly successful launch of the Saab 9-5 2.0t BioPower flex fuel car in Sweden, Saab will this week unveil a concept version of the 9-5 Aero BioPower, capable of producing 310bhp and 440 Nm torque, at the North American International Auto Show (NAIAS) in Detroit.

Powered by E85 bioethanol, a renewable and sustainable fuel, the 2.3-litre high-output turbocharged engine of the 9-5 Aero Estate show car delivers almost 20 per cent more power (310 bhp vs. 260 bhp) and 25 per cent more torque (440 Nm/325 lb.ft vs. 350 Nm/258 lb.ft) than its regular petrol equivalent, proving that it is possible for drivers to enjoy the benefits of increased power and performance while having a greater regard for the environment.

On the road, this power increase is expected to translate to zero to 60 mph acceleration in under 6 seconds, compared to 6.9 seconds for the standard petrol 9-5 Aero. This is all achieved alongside a dramatic improvement in environmental performance, through significantly-reduced emissions of fossil carbon dioxide (CO2), the 'greenhouse' gas that is widely believed to contribute to global warming, by up to 70 per cent.

Saab already leads the European premium car segment in offering a flex fuel model. Sales began in the Swedish market in late Summer 2005, where the Saab 9-5 2.0t BioPower's winning combination of enhanced engine and environmental performance - its power is raised from 150 to 180 bhp when running on E85 - currently accounts for 70 per cent of all 9-5 sales, and outsells all other alternative fuel vehicles combined. The same model also recently attracted Popular Science magazine’s ‘Best of What’s New’ award, an annual selection of 100 breakthrough new products and technologies.

Now BioPower technology is being applied for the first time to Saab's top-of-the-range 9-5 Aero performance model, showcasing the potential of developing a version for global markets, including North American where E85 fuel availability is becoming more widespread.

Bioethanol fuel is produced commercially from agricultural crops or forest residues and is already produced in the USA Midwest region from corn. Unlike petrol, its consumption does not raise atmospheric levels of CO2. This is because the emissions that are released during driving are balanced by the amount of CO2 that is removed from the atmosphere through the natural photosynthesis process when crops for conversion are grown. To ensure good cold starting performance, bioethanol is usually blended (85% bioethanol/15% petrol) and sold commercially as E85 fuel.

E85 is a high quality fuel with a higher octane rating (104 RON) than petrol, allowing the engine's ignition timing to be advanced for more power without risk of harmful 'knocking'. The adaptability of Saab's unique in-house Trionic engine management system has facilitated re-programming to accommodate its different ignition and fuel/air mixture requirements. The only hardware modifications necessary for BioPower are more durable valves and valve seats, and the use of bioethanol-compatible materials in the fuel system, including the tank, pump, lines and connectors.

Trionic monitors fuel quality after every visit to the filling station and automatically makes any adjustments necessary for running on E85 and/or petrol in any combination, up to 85 per cent. This means that Saab BioPower drivers can also use regular petrol, should E85 not be available when they refuel.

During the development of Saab’s BioPower technology, Swedish engineers liaised with their General Motors colleagues in Brazil where 100 per cent bioethanol (E100), produced locally from sugar cane, is the dominant fuel on the market. Saab has found that its turbocharged engines are particularly well-suited to exploiting the benefits of bioethanol, allowing the possibility of introducing higher compression ratios for optimum power and efficiency, while also encouraging powertrain downsizing.

"We are delighted to be taking the lead in the development of BioPower, which expresses many of the traditional values of the Saab brand by providing performance with responsibility," says Jan-Åke Jonsson, Saab Automobile AB's Managing Director. "We are convinced that alcohol-based fuels like bioethanol can provide an effective short to mid-term solution in our search for sustainable alternatives to fossil-based fuels for road transport.

"It is compatible with conventional petrol engines and can be supplied through the existing fuel infrastructure, without the need for any major new investment. A transition towards bioethanol can run in parallel with the development of other, longer-term energy solutions, which could also include bioethanol as an energy-carrier for the introduction of fuel-cell technology."