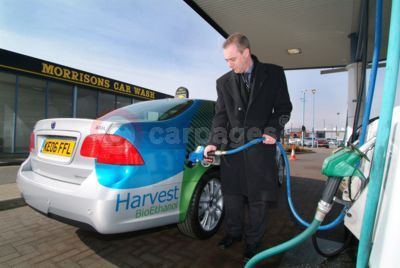 Morrisons supermarket will today open the UK’s first BioEthanol E85 filling pump, tying in with the first deliveries of the Saab 9-5 BioPower flex-fuel car. The fuel will be branded as Harvest BioEthanol E85, with the environmentally-friendly pumps featuring a new butterfly logo and a blue filling hose.

Morrisons, which is the UK’s fourth largest supermarket chain (with 274 petrol forecourts across the UK), will locate the UK’s first BioEthanol E85 pump on the forecourt of its Albion Way, Norwich site to be immediately followed by supplies of Harvest BioEthanol E85 at another four of its sites in the East of England – those of East Dereham, Lowestoft, Diss and Ipswich - plus at five sites in Somerset, in the South West of England. Furthermore, Morrisons has already earmarked several other sites across the UK, where Harvest BioEthanol E85 could soon be sold, according to consumer demand for it.

Phil Maud, Petrol Director at Morrisons, commented on today’s news: "Morrisons is proud to be the country’s first petrol retailer to open a BioEthanol E85 refuelling pump, reinforcing our position as the UK’s largest forecourt retailer of alternative fuels. We believe that by encouraging the use of BioEthanol E85 we can contribute to a reduction in the harmful effects to the environment caused by the burning of fossil fuels." Mr Maud went on to comment: "Furthermore, creating demand for this product will, in the medium to long term, present major opportunities for UK farmers, who have always had strong support from Morrisons, to supply their excess cereals capacity to supply BioEthanol manufacturers."

Harvest BioEthanol E85 will retail for 2 pence per litre less than petrol. In Norwich, this means that, at the time of launch, it will sell for 84.9 pence per litre compared to 86.9 pence per litre for unleaded petrol. Morrisons has chosen East Anglia for the launch because of the region’s role in spearheading the fast-emerging UK biofuels industry.

The availability of BioEthanol E85 on the first UK forecourts has been timed to coincide with the first customer deliveries of the Saab 9-5 BioPower, which was officially launched in the UK in November 2005. Saab is leading the premium sector in being the first manufacturer to offer this innovative solution. Saab BioPower technology enables its cars to run on either the potent yet environmentally-friendly fuel BioEthanol E85, which is a blend of 85% BioEthanol and 15% petrol, or on pure petrol, without any adjustment required by the driver. When running on BioEthanol E85, the fossil CO2 emissions of the Saab 9-5 BioPower are typically between 50-70% cleaner than when running on petrol. Furthermore, as its name suggests, the Saab 9-5 BioPower not only offers purer power, but more of it. Because Saab’s turbocharging technology and engine management systems make it possible to take advantage of bioethanol’s higher octane rating, an impressive 20 per cent gain in brake horse power and 16 per cent growth in torque can be enjoyed when the car runs on BioEthanol E85 compared to when running on regular unleaded petrol.

Jonathan Nash, Managing Director of Saab Great Britain, said: "Biofuels can play a crucial role in reducing CO2 emissions from passenger cars, and as the Government itself said when it announced plans for a Renewable Transport Fuel Obligation (RTFO) in November, a 5% use of biofuels today would be equivalent to taking one million cars off the road. Although I welcome the positive steps that the British Government has taken so far in its introduction of a 5% RTFO and the 20 pence-per-litre tax rebate on biofuels, our experience in other markets shows that the Government needs to take a more strategic approach. Government should show genuine joined-up thinking, by introducing an integrated package of long-term incentives to give consumers the confidence to make the switch to greener fuels, including BioEthanol E85."

Mr Nash went on to point out that: "In Sweden, central and local government financial incentives to encourage BioEthanol-fuelled cars - including a reduction in company car tax, exemption from Stockholm’s congestion charges and free city parking - have resulted in over five and a half thousand Saab 9-5 BioPower cars already being delivered to Swedish drivers since last summer. Here in the UK, Morrisons has demonstrated its commitment to the fuel - now let's see the Government do the same."

Futura Petroleum will supply Morrisons with the Harvest BioEthanol E85 in an initiative supported by the Energy Saving Trust and Renewables East.

Simon Davis, Head of Sales at Futura Petroleum, the supplier of Harvest BioEthanol E85 to Morrisons, commented: "We are delighted to be working with Morrisons and Saab to provide Harvest BioEthanol, the first E85 available to the UK public. This launch reinforces Futura’s position as the leading supplier of renewable motor fuels to British motorists."

Also commenting on the arrival of BioEthanol E85, Tim Curtis, Director of Operations at the Energy Saving Trust, which is a not for profit organisation funded by the Department for Transport, Scottish Executive and the Welsh Assembly Government, added: "Today’s opening sends an important message to both businesses and consumers that retailers and manufacturers are taking the carbon challenge seriously and finding real solutions to reduce increasing CO2 emissions from road transport. What’s more, the Energy Saving Trust is pleased to announce that projects of this type can receive grant support via its infrastructure programme, providing further incentives for industry to develop alternative refuelling options to deliver a more sustainable transport future."

James Beal, Managing Director of Renewables East, the public-funded renewable energy agency for the East of England which is pioneering the development of biofuels and other forms of renewable energy in East of England, said: "I congratulate Morrisons for its proactive action in launching Harvest BioEthanol E85. Developing this market has the opportunity to create and secure up to 10,000 jobs in agriculture and fuel production in the UK, thereby providing an important market opportunity for the East of England given its position as the cereal-growing capital of the UK.

BioEthanol is produced from a wide variety of agricultural produce, including forest residue, sugar cane, sugar beet and grain, making it a totally renewable and sustainable fuel source. When mixed in high volumes with low volumes of petrol, a potent yet environmentally friendly fuel, known as BioEthanol E85 is created.

Unlike traditional fossil fuels such as petrol and diesel, the consumption of BioEthanol E85 does not significantly raise atmospheric levels of Carbon Dioxide (CO2), which is the greenhouse gas that, according to some scientific research, contributes to global warming. This is because the emissions that are released during driving have already been cancelled out by the amount of CO2 that was removed from the atmosphere, through nature's photosynthesis process, when the crops for conversion to BioEthanol were grown.