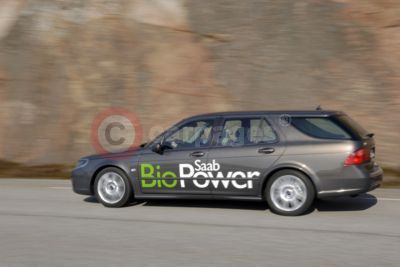 The launch of the Saab 9-5 BioPower has taken the Swedish market by storm this year, outselling its full-year 2006 sales target in just four months. More than 9,000 of the eco-friendly model are now expected to be sold next year.

The Saab 9-5 BioPower, a flex fuel car that is capable of running on the environmentally-friendly yet potent fuel, bioethanol, or on pure petrol or any combination of the two, has taken the Swedish market by storm in 2005, smashing all of its original sales targets to become one of the most successful launches in Saab's - and Sweden's - history. Despite the fact that deliveries didn't start until late August - and that BioPower technology is only available on one engine variant in the 9-5 range - Saab expects to take more than 5,500 orders for the BioPower by the year end - equivalent to the original sales forecast for the whole of 2006!

"We expect to deliver 3,900 Saab BioPowers this year," says Bengt Nilemo, Managing Director, Saab Sweden. "And next year's forecast is now about 9,000 cars, which we have increased to reflect the growing awareness among our customers of the issues surrounding CO2 [carbon dioxide] emissions and global warming. Our 9-5 BioPower model has the potential to reduce CO2 emissions by as much as 80 per cent, without compromising safety, performance or comfort."

The 5,500 BioPower cars include variants for both model year 2005 and 2006 (the major redesigned version introduced in October). The ability to sell so many cars so quickly in the relatively small premium large car segment says a great deal about Sweden's concern for the environment. It also says something about the nation's affection for the Saab 9-5, a car that has been identified as Sweden's safest several times in surveys by the leading insurance company Folksam. "Current financial incentives, such as a reduction in car benefit tax and projected city congestion and parking charges, have, of course, also contributed to our success," Bengt Nilemo adds. "These initiatives from the government were far-sighted and the market has reacted just as everyone expected, choosing eco-friendly cars that cut CO2 emissions."

And the 9-5 BioPower is not the only eco-friendly initiative from Saab. In addition to offering a maintenance-free particulate filter on new turbo diesel 9-5 models, development work on an advanced hybrid continues within the GM cooperation. A driveable prototype is planned for the spring, including solutions that in one way or another may appear in a Saab or other GM products within the next few years.

"Because Saab is part of a huge global company, we have access to resources and competences that make us second to none," Bengt Nilemo adds. "GM today has a strong focus on eco-friendly cars with low fuel consumption and the BioPower bioethanol concept is just one part of this. BioPower's major advantage is its simplicity and this is one of the reasons we are now introducing the car in Great Britain, France and Germany, followed by Norway, Finland and Denmark. At the Detroit motor show in January we will also show a concept for a 9-5 Aero BioPower with 310 hp."