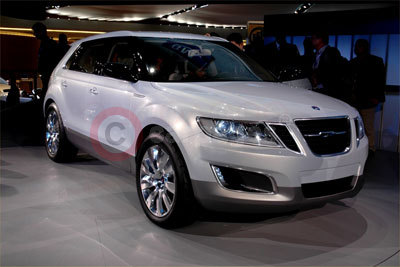 Saab’s future style made its debut at Detroit on the new 9-4X luxury sports-utility vehicle. The VW Touareg-sized 4x4 features styling cues inside and out that will feature on all future Saabs, said Mark Adams, GM Europe’s vice-president of design.

External features include a new, bolder treatment of the Saab grille and wraparound front and rear windscreens, while inside the driver’s cockpit area is bolder, with a less vertical dashboard than on current Saab models. Interior trim colours feature distinctly “Scandinavian” colours. Adams acknowledges that rival Volvo is also taking a similar approach, but believes that both brands will benefit.

“What distinguishes Saab from Volvo is our focus on driving performance,” he said. The 9-4X is likely to be built in North America. Sales are expected to be roughly split 50:50 between Europe and North America, but it makes sense to build it here in America because of exchange rates, and because a Cadillac crossover will use the same architecture as the 9-4X.

The car is likely to go on sale “by the end of 2009”, said Adams. The prototype at Detroit has a flex-fuel 2-litre turbo petrol engine developing 300bhp. Its styling will carry through to future Saabs, including a small ‘9-1’ concept expected at the London motor show in July. Adams said Saab’s design team was looking at both Audi A3-sized concepts and smaller, Mini-sized cars. “There’s a strong heritage in smaller Saabs with cars like the 96,” he said.

This is a 14-year+ news article, from our Saab archive, which dates back to the year 2000.

If in doubt check with your local Saab dealer as car prices and technical data will have changed since 2008.

Saab 9-4x Images may not be UK specification cars. Colours and exterior and/or interior elements may differ from actual models.