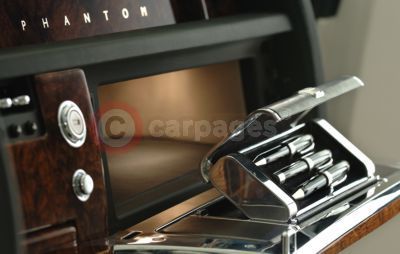 Rolls-Royce has commissioned Conway Stewart to produce 25 writing instrument sets to mark the 80th anniversary of the Rolls-Royce Phantom. Each set will be housed in a hand-crafted case of aluminium and leather, made in the Rolls-Royce workshops at Goodwood. Each one will be fitted into the glove box of one of 25 special Phantoms, built to commemorate the anniversary.

The set will comprise three items - a Duro-style fountain pen, ballpoint pen and propelling pencil. Originally designed in the mid 1920's - like the first Phantom - the Duro pen was widely acclaimed for its quality and style. It was therefore judged entirely fitting to be included in the specification of this motor car.

Conway Stewart is one of the great English pen makers. Thomas Garner and Frank Jarvis started the company in 1905.

This is a 16-year+ news article, from our Rolls Royce archive, which dates back to the year 2000.

If in doubt check with your local Rolls Royce dealer as car prices and technical data will have changed since 2005.

Rolls Royce Rolls-Royce Phantom Images may not be UK specification cars. Colours and exterior and/or interior elements may differ from actual models.